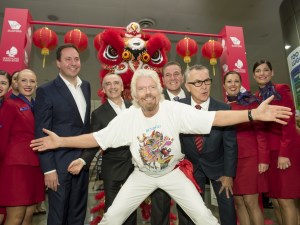 Virgin Australia today launched its inaugural flights to Hong Kong, marking the start of the airline’s expansion into Greater China.

“Both Melbourne and Hong Kong are such vibrant, fantastic cities and to be able to connect them with the world’s best Business Class and the best cabin crew is truly exciting,” he said.

Sir Richard said previously the route “has been far too cosy” with just two airlines flying it.

“It desperately needed Virgin competition, so we’re here today to shake things up on this route.”

Sir Richard praised the Virgin Australia team for its passion.

“Their passion for making this airline standout from the rest is contagious,” he said.

“I’ve been lucky enough to spend some time with the team at Virgin Australia this week and I truly believe they are the best in the business.”

Start of expansion into China

“Through Virgin Australia’s direct services to Hong Kong and our partnership with Hong Kong Airlines, Australians can enjoy convenient travel to Greater China.

“Virgin Australia is renowned for bringing choice and competition and since our flights went on sale we have seen our competitors discount their Melbourne-Hong Kong fares by as much as 34 per cent compared to before our fares were launched.

“Hong Kong and mainland China are two of the largest and most valuable inbound travel markets for Australia and we are excited to introduce Virgin Australia to these regions. We believe there is tremendous opportunity for growth in these markets.”

Last month Virgin Australia was awarded Best Airline and Best Airline Staff in the APAC region and was the highest ranked Australian airline in the Skytrax World Top 100 list.

Virgin Australia’s inaugural flight to Hong Kong left Melbourne at 9.40am, with much fanfare at Melbourne International Airport.

Sir Richard carried the head of a 32m long local Bendigo dragon, Yar Loong, in a traditional procession with lion dancers and drummers to celebrate the airline’s milestone.

They were treated to traditional egg tarts and Old Town Central walking guides at the boarding gate, Cantonese lessons conducted on board with Sir Richard Branson, fortune cookies, and a Hong Kong-inspired menu.

Virgin Australia’s resident chef Luke Mangan also travelled on the inaugural flight, taking Business Class guests through the new menu which has been designed to highlight Hong Kong’s culinary delights, with dishes such as pork and shrimp wonton soup with bok choy and bamboo shoots.

The inaugural flight also marked the launch of Virgin Australia’s inflight Duty Free. Virgin Australia has partnered with more than 100 Australian and international brands which will be offered to travellers on flights between Melbourne and Hong Kong.

Virgin Australia will operate five services a week between Melbourne and Hong Kong with its Airbus A330-200 fleet.