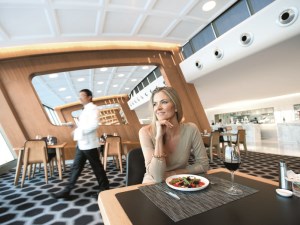 Qantas may soon refuse entry to its airport club lounges for passengers “who don’t look the part.”

From April 1, the airline will be more strict about enforcing its “minimum smart casual dress guidelines” at Qantas Clubs and Qantas Business Lounges in Sydney, Melbourne, Brisbane, Canberra, Perth, and Adelaide airports.

So being a ticket-holder for premium seats or being a Qantas Club member may no longer be sufficient to gain access to its prestigious airport club lounges.

While the airline doesn’t expect passengers to be dressed for a formal, it will no longer give entry to passengers sporting sleeveless tanks, bare feet, rubber thongs, or clothing with offensive images or slogans.

To make passengers aware of the new guidelines, Qantas will display signage at the entrance of each Qantas lounge until April 1.

“The vast majority of our members meet and exceed the guidelines,” the airline says.

“But we have had some feedback from our customers that they want to see those guidelines apply to everyone.”

And the sentiment still holds. In a poll with 3,224 votes conducted by Australian Business Traveller, 84 percent of people were in favour of the dress code compared to the 16 percent who were against it.

Tweet
Previous Comments Leave A Comment
Chris Herbert
Dress Code Qantas a great move, I like many others we all pay for the privilege to be a Qantas Member to utilise the clubs as a place to relax undertake work etc with some degree of style and comfort as we all do in this world, and don’t need to see other members wondering in dressed in shorts singlets and thongs, it is lowering the standard we have paid for not to see, dare I say this, we in Australia need to lift our standards we are becoming very sloppy in deed.
SUBSCRIBE TO OUR FREE NEWSLETTER
Our latest e-magazine is OUT NOW. Click here to read.