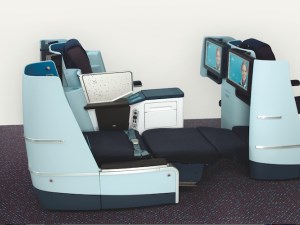 The new color palette of the cabin features KLM’s signature blue, shades of navy, and brown.

Carpets were woven from recycled materials including old KLM flight attendant uniforms and sheep’s wool, which would have otherwise been wasted.

New full-flat seats have also been deployed on select airplanes with additional legroom and privacy screens between guests.

The number of seats will be reduced from 42 to 35 on Boeing 747-400 planes, creating additional personal space and privacy.

Other updates to the cabin include new lighting, blankets, dual-face pillows for sleeping, cushions, and upholstery.

The new design has already been introduced on the fleet’s Boeing 747-400 fleet, with the rest of the fleet projected to be refurnished by the summer of 2014.