Cathay Pacific gets a sparkling facelift 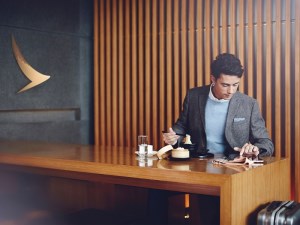 The airline has been working on its latest rebranding for nearly two years.

Cathay recently unveiled a new logo which features a single brush swish and color-coding for the different classes of travel.

Others changes will be rolled out during the next 18 years, including everything from new lounges and entertainment options to in-flight services and website features.

Cathay Pacific was named the 2014 Airline of the Year by Skytrax, a global airline ranking system. It is not the first win for Cathay, which previously claimed the top spot in 2009.

Cathay dethroned the 2013 Skytrax winner, Emirates, which slid to number four last year. The airline invested heavily in its plane cabins this year, contributing to its win.

Skytrax generates the awards through the survey of millions of travellers from more than 160 countries. The benchmarking group claims the results are objective and free or monetary influence, though the survey did see controversy this year when Etihad (the ninth ranked airline for 2014) announced its withdrawal from the awards citing unequal comparisons between airline products.