Stand by for new generation of megaships 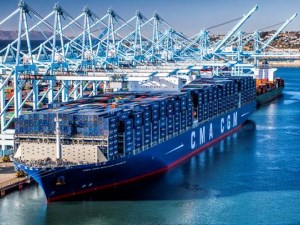 The arrival of the CMA CGM Benjamin Franklin in Los Angeles late last year heralds a new era of mega-ships in the US.

The Benjamin Franklin arrived at Port of Los Angeles from China on December 26, before heading north to the port of Oakland.

It is the largest container ship ever to call at a North American port.

The 398m, 18,000 TEU vessel will operate a regular service connecting some of China’s main ports, including Xiamen, Nansha and Yantian with Los Angeles and Oakland.

Up until now, mega-container ships of this capacity have been deployed exclusively on the Asia to Europe trade.

It took about 1,500 Longshoremen 56 hours to move nearly 11,230 containers on and off the Benjamin Franklin, the Port of Los Angeles said.

And despite its size, the gigantic vessel is a model for high-energy production.

Her 78-foot-long engine room contains a latest generation engine as powerful as 900 Ford Focus cars and her 21 knots thrust is equivalent to that of 11 Boeing 747-400 engines (3,000 KNewton). The vessel has the electric production of a city of 16,000 inhabitants (14MWatts).

The vessel has a crew of 26 members including a chef, and it also has a swimming pool.

It arrived in Los Angeles with containers stacked seven high, but at full capacity it is designed to stack 10 containers high. The terminal cranes are expected to be ready to take the vessel’s full capacity by the end of 2016.

Most North American ports are not deep enough to handle vessels of this size, and there have also been concerns about whether container handling productivity was strong enough in US terminals to unload these new giants effectively.

The Port of Los Angeles handled a total of 709,968 TEU in November 2015, an increase of seven percent compared to the same period last year.

Canada on track to handle megaships

The Port of Oakland and ports of Seattle and Tacoma also have terminals large enough to accommodate megaships. The Prince Rupert port in British Columbia, Canada, is on track to handle such vessels by 2017, followed by the Port of Vancouver early next decade.

However, the Panama Canal will remain a “no go zone” for the megaships, despite the recent expansion (expected to open later this year). The passageway will only be able to handle ships in the 13,000 TEU range.

Receiving an 18,000-TEU capacity vessel for the first time requires long and meticulous preparation to guarantee a flawless call and fluid operations in as little time as possible.

For several weeks, the CMA CGM Group has been working with all parties: the Port of Oakland and NWS Seaport Alliance, the San Francisco Bar Pilots, Ports America Outer Harbor, railroads, trucking companies and many others in the maritime supply chain.

As a part of this preparation, CMA CGM, the Port of Oakland and the San Francisco Bar Pilots (SFBP) executed vessel simulations at the California Maritime Academy: seven San Francisco Harbor pilots ran two different simulations in presence of a CMA CGM Senior Captain – one to perfectly handle mooring with such a vessel, the second one was focused on sailing.

These vessels, with capacities of 18,000 20-foot container units or larger, will place unprecedented demands on ports to expand cargo-handling capacity and improve marine terminal efficiency.

Australian ports are not expected to receive these gigantic vessels anytime soon.