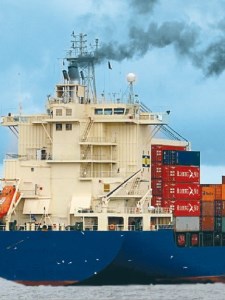 Stronger action is needed to reduce greenhouse gas emissions from ships and a carbon tax on shipping would be a way to achieve it, a major international transport forum has heard.

“This approach has the advantage of administrative simplicity. It would be easier to implement than any other market-based mechanism,” the OECD’s International Transport Forum said in a policy brief.

The 2009 Copenhagen Accord on climate change set out goals for reduced carbon dioxide emissions to limit global warming to 1.5 or 2°C by 2100.

Bringing the shipping industry into compliance with these goals would force companies to halve vessel emissions by 2050 and reduce them to zero by 2080.

The International Transport Forum said efforts to reduce shipping’s carbon emissions “would gain huge impetus” if the United Nations’ International Maritime Organization were directed to set strict emissions targets and create requirements that would include a carbon tax.

“The impact on maritime trade would be marginal if the tax were set at about $25 per ton of CO2,” Olaf Merk, an analyst at transport forum, wrote in a policy brief.

“Money from the tax could support the UN’s Green Climate Fund,” he said.

This would help compensate developing nations that would be affected by a carbon tax on shipping.

Mr Merk recommended that the IMO be given a mandate “to develop an action plan with concrete measures to reach the emission targets.”

“It would be odd if countries are expected to adhere to emission targets but not the shipping sector, especially since it would be impossible to apportion shipping emissions to countries,” the forum said in the policy brief.

The UN’s conference on climate change, known as COP 21, is scheduled to meet in December in Paris in an effort to reach a legally binding agreement among nations to keep global warming below 2°C.

“The reduction of shipping emissions would gain huge impetus if COP 21 would agree to an ambitious package for the shipping sector,” the transport forum said.

In 2012, the shipping industry contributed 800 million metric tons, or 2.2 percent, of worldwide carbon emissions, with the majority coming from container ships, bulk carriers and tankers, the forum said in its policy brief.

Shipping’s carbon dioxide emissions have doubled since 1990 and are projected to rise by 50 to 250 percent in the next 35 years, the International Transport Forum said.

The maritime industry has been working to reduce emissions.

The World Shipping Council which represents container shipping lines, says maritime shipping is “world’s most carbon-efficient form of transporting goods,” and that carriers support efforts to reduce carbon emissions and work out a global agreement through the IMO.