Panda has landed: Bei Bei touches down in China 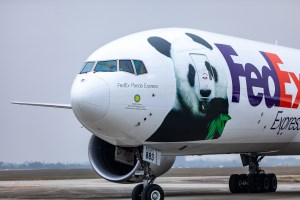 FedEx Panda Express B777F transported a four-year-old endangered giant male panda from the US to its new home at Chengdu, China.

Bei Bei, a male panda born in 2015 at the Smithsonian’s National Zoo, is the offspring of Mei Xiang and Tian Tian, both currently living in the National Zoo in Washington, DC.

Accompanied by a panda keeper and a veterinarian, Bei Bei was placed in a special crate provided by FedEx and travelled non-stop from Washington’s Dulles International Airport to Chengdu with a supply of his favourite treats. This included 30kg of bamboo, nearly 1kg of apples and pears, two bags of leafeater biscuits, nearly 1kg of cooked sweet potatoes and water.

“We are honored to again be part of a truly special mission,” said Karen Reddington, president, Asia Pacific, FedEx Express. “The successful transportation of Bei Bei underscores the company’s commitment to safely and securely transporting even the world’s most precious cargo.”

“We are looking forward to seeing Bei Bei adapt well to his new environment.”

Before the flight, Bei Bei spent a month getting accustomed to the crate space for a comfortable journey in a familiar environment.

Upon arrival in Chengdu, Bei Bei’s new keepers from the China Conservation and Research Center for the Giant Panda met him on the tarmac and drove him to Bifengxia Panda Base where he will stay in quarantine for approximately 30 days.

The Smithsonian’s National Zoo’s keeper will remain with Bei Bei for a short time as he gets used to his new home in China.

FedEx Express also provided logistical support in Washington, DC to deliver Bei Bei from the zoo to the airport.

FedEx pilots, drivers and operations specialists selected to transport Bei Bei are among the company’s most seasoned team members.

This showcases end-to-end capabilities to handle special shipments that meet the highest standards of operational excellence in the industry.

This is the eighth time that FedEx Express has transported giant pandas, including seven trips from 2000 to 2017.

Their brother, Tai Shan was brought back to China in 2010 and their parents Mei Xiang and Tian Tian were sent to the US in 2000.

Giant pandas are solitary in the wild, and cubs separate from their mothers to establish their own territories between 18 months and two years old.