'USMCA is the most important deal we've ever made by far’
US President Donald Trump read more
Our new e-magazine is OUT NOW. Click here to read.
REGISTER ADVERTISE
SUBSCRIBE TO OUR FREE NEWSLETTER
PUBLISHED | JUNE 28, 2016
COMMENTS | NONE
Tweet 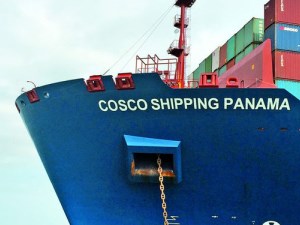 After nearly a decade in the making, Panama has opened the new A$7.2 billion expansion of its shipping canal.

The modifications are designed to boost global trade by doubling the Panama Canal’s capacity.

The canal provides a 80km shortcut between the Atlantic and Pacific oceans.

With a band playing and flags waving, the container ship carrying more than 9,000 containers entered from the Atlantic to begin the first crossing. It's one of the modern class of mega-vessels that will now be able to use the canal.

Panama's Foreign Ministry said the event was a diplomatic success, with representatives from the US, China, Japan, Peru, South Korea, Colombia and Mexico in attendance, as well as executives from top shipping firms and thousands of Panamanians.

Panama's plan behind the expansion is to triple the $1 billion in revenue it currently gets from canal shipping fees.

However, that goal might still be a decade or more away, according to officials from the Panama Canal Authority, the autonomous Government agency that runs the waterway.

The project was nearly two years late due to construction delays and labor strife and the Spanish and Italian led consortium that carried out the expansion are demanding hundreds of millions of dollars in cost overruns.

Deputy chairman of Seaspan Corporation Peter Shaerf, a container ship group with a fleet of 100 vessels, said the augmented canal "will have a huge impact on trade".

The expansion is "one of the engineering wonders of the world,” Mr Shaerf said.

As well as widening the canal, Panama is adding a second metro line at a cost of $2 billion and is planning a third. It has also built a new bridge over the canal that will have six lanes for cars and two for a metro monorail.

And it is doubling the size of its airport and examining the possibility of establishing a new port for its Pacific coast.

Meanwhile, shipping experts have expressed concern about the ability of the nearly 300 canal pilots to safely guide the new giant ships through the snug locks and channels. The height of the bigger container ships – capable of carrying 14,000 containers, more than double previous maximums – could leave them susceptible to wind gusts, they say.

The expansion of the canal has also strained supplies of fresh water, which the canal needs to run the locks. Gatun Lake provides water to the canal and drinking water to much of the country.

Since the canal was handed over from US control at the end of 1999, the waterway has generated about $10 billion in direct income for the Central American nation and is responsible for about 40 percent of its GDP.

Some 35 to 40 vessels transit the waterway each day, and the canal is estimated to handle about 6 percent of world maritime commerce. The US is still its biggest user.

Panama began the expansion nearly a decade ago. Originally planned to open in late 2014 around the waterway's centennial, the new locks can accommodate ships that carry up to three times the cargo of those previously able to use the canal.