‘UK wine exports are at their highest level in a decade’
Rachel Triggs, Wine Australia read more
Our new e-magazine is OUT NOW. Click here to read.
REGISTER ADVERTISE
SUBSCRIBE TO OUR FREE NEWSLETTER
PUBLISHED | APRIL 21, 2015
COMMENTS | NONE
Tweet 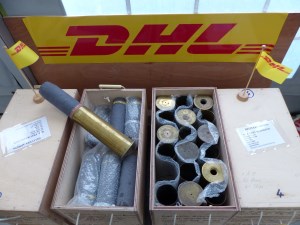 DHL has delivered to Sydney a shipment of historic ammunition shells and projectiles gathered from European battlefields where Australian and New Zealand soldiers fought in World War One.

Over 50 artillery shells were collected to complete an historic 18-pounder gun exhibit, known as the ANZAC centennial gun project.

The ammunition shells and projectiles in seven boxes, weighing about 300kg, were collected in Ypres, Belgium and shipped to Heathrow free of charge by DHL Global Forwarding Australia, before being flown to Sydney.

Tony Boll, CEO, DHL Global Forwarding South Pacific said:  “We are truly honoured to play a role in such a unique project.

“The spent ammunition  – all inert – will go into a limber that accompanies the horse-drawn 18-pounder gun, creating a historic record of the battles where ANZAC forces played such a significant role – so very far from home – 100 years ago.

“We decided to sponsor our part of the shipment cost because it will be of great educational value to Australians and New Zealanders for many years to come.”

April 25 marks the 100th anniversary of ANZAC Day – Australian and New Zealand Army Corps (ANZAC) – a national day of remembrance in Australia and New Zealand that broadly commemorates all Australians and New Zealanders "who served and died in all wars, conflicts, and peacekeeping operations".

As part of the commemorations, the Royal Australian Artillery Historical Company (RAAHC) is recreating an iconic World War One 18-Pounder gun team – the mobile horse-drawn gun unit that the Australian artillery was famous for and features on the $100 Australian bank note.

An original fully-restored 18-pounder with its battlefield shells pulled by six horses and manned by a gun crew will form a central part of the centennial ANZAC day march in Canberra – before touring the country as a mobile exhibit.

DHL Global Forwarding was first contacted by Jim Frecklington, Keeper of the Gun, a member of the team working on restoring the 18-pounder gun. Mr Frecklington visited over 50 battlefields to collect the historic ammunition that were typically handed over by the Mayors of the towns he visited.

“Over 62,000 men and women form the ANZAC forces lost their lives in World War One, said Mr Frecklington.

“These forces took their own guns and ammunition to Europe as well as over 136,000 horses – only one of which returned to Australia. The 18-pounder gun was designed for an army that needed to move around quickly – it had to be mobile, light and rapid firing. During the course of the war, the 18-pounders fired over 99 million rounds. Many brave men were awarded the Victoria Cross – but there were many men whose bravery no one ever knew. I wish to sincerely thank DHL for their great support in the ANZAC centennial gun project.”

Special permission had to be sought from the Belgium government for licenses to export the historic ammunition which is being specially packed by DHL Global Forwarding for the journey from Polygon Wood near Ypres, the site of one of the Great War’s most famous battles.

The two-year gun project by the RAAHC aims “to provide a living memorial to Australian Artillery by deploying the gun and team for commemorative events starting in 1915 for the 100th anniversary of Gallipoli.”

It was Australia’s main piece of artillery used at Gallipoli and on the Western front.