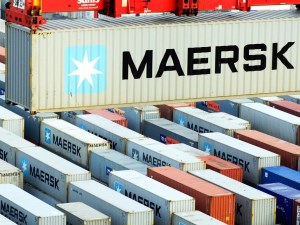 Maersk workers had to improvise with Twitter, WhatsApp and Post-It notes as they struggled to get goods moving from ships to shore again, the company said.

Maersk’s revelations, reported in the Los Angeles Times, were part of an interim second-quarter earnings report in which the Copenhagen-based global transport and energy company gave investors a preview of expected costs from the malware attack. The worm, dubbed NotPetya, locked access to systems that Maersk uses to operate shipping terminals all over the world and took two weeks to fix.

The company said the attack is expected to dampen its third-quarter results, but not enough to overshadow a generally good performance due to improving global economic conditions.

No data was lost

Maersk was one of about 7,000 companies attacked globally.

Maersk Chief Executive Soren Skou told investors that NotPetya “made all of our applications and data unavailable for a while.”

No data was lost, no workers were endangered, and ships operated normally throughout the ordeal, he said. But for up to two days, affected terminals couldn’t move cargo.

Goods started flowing normally again bit by bit, thanks to “many work-arounds” devised by hard-pressed Maersk employees, Skou said. Two weeks later, business was back to normal, he said.

Maersk’s overall business has improved, however, as rising freight rates have given the company a boost and global trade has ticked back up.

Maersk reported $389 million in underlying net income for the second quarter for its consolidated business, almost three times last year’s $134 million second-quarter profit. But because the consolidated company also recorded a substantial charge from lower asset valuations in its tanker businesses, total net loss for the quarter came to $264 million.

The company’s transport and logistics arm, which controls 15% of the total global container-ship fleet capacity, reported total revenue of $7.7 billion for the quarter. That’s up nearly $1 billion from the corresponding period last year.