Cargo delivery zeppelins may soon be on the horizon, say researchers 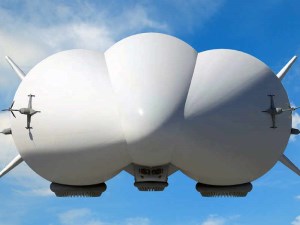 Could zeppelins hold the key to the future for global cargo deliveries?

The researchers based in Canada and Hong Kong have been analyzing trade corridors between Asia and North America and Europe.

They found that airships could provide an entirely new way for companies to reach global markets.

Although airships are much slower than airplanes, they are also much larger – capable of carrying cargo ordinarily sent by even slower maritime routes.

And unlike conventional shipping, airships can go pretty much anywhere – from busy seaports to remote inland locations. They are also relatively low-cost and feature smaller carbon footprints.

Early models have been reborn

Modern “airships” have come a long way since the launch of the Goodyear Blimp or the Hindenburg.

A report in the International Journal of Aviation Management notes that airship technology has moved well beyond those decades-old examples.

Those early models have been “reborn” and are capable of efficiently and economically handling large cargo loads.

The big question is whether companies are ready to embrace such an unconventional method.

Only time will tell.