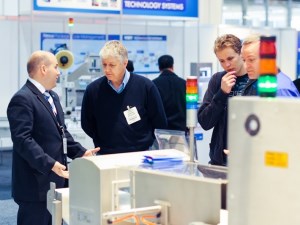 The food and agribusiness industry accounted for $53.9 billion in revenue in 2014-15 alone.

Making up 4 percent of Australia’s GDP, the industry employs hundreds of thousands of people and contributes significantly to the success of Australia’s exports.

Australia has a global reputation for high safety and quality standards.

But to stay up to date with new technology and keep ahead of the curve, Australian food manufacturers must be compliant and competitive.

Since it first ran in 1967, foodpro, Australia’s premier exhibition for the food industry, has played an important role in the growth of the food processing, manufacturing and packaging industries. It has also helped to promote Australian food technology to the world.

This year’s show, held at the new International Convention Centre in Sydney last week, showcased the latest trends in the food industry.

The largest foodpro to date, the event boasted record numbers of exhibitors (350) and the largest visitor attendance ever in Sydney to help celebrate the show’s 50th anniversary.

On display were products and innovations relevant to all aspects of the food manufacturing industry including meat and seafood, value-add processing, beverages, dairy, fresh food and shelf foods.

Again, there was a strong focus on new trends as well as addressing key issues facing the industry including traceability, food safety and sustainability.

Visitors to this year’s show had the opportunity to hear from industry experts, engage in topical discussions and learn from peers.

No signs of slowing down

foodpro 2017 played host to the annual AIFST (Australian Institute of Food Science and Technology) Convention, with more than 600 delegates in attendance.

If the success of foodpro 2017 is anything to go by, Australia’s food industry is showing no signs of slowing down.