World first: The new glue that seals wounds in seconds

Imagine a kind of superglue that can be squeezed onto a deep cut or gunshot wound to seal it shut – in 60 seconds.

Imagine that it not only stops the bleeding, but also sends signals to the body to start repairing the wound – at twice the regular speed.

It sounds like science fiction, but this incredible new glue invented in an Australian lab could revolutionise emergency care and surgical procedures all over the world. Significantly, it doesn’t just work outside the body – it can seal internal wounds on a heart, lungs, and even arteries.

"I believe the impact would be substantial,” says a member of the team behind the adhesive, Professor Anthony Weiss from the Charles Perkins Centre at the University of Sydney.

“It can rapidly stem blood flow, which would make it perfect in an emergency situation where one or dozens of people need assistance. I also see it being used in surgery – you could have the whole thing sealed up in 60 seconds.”

The adhesive is made from a synthetic version of a protein called tropoelastin, which forms naturally in the growing tissues of newborn babies.

Tropoelastin is the precursor to functional elastin, which gives your skin, blood vessels, lung tissue, ligaments and tendons the ability to regain their shape after stretching or contracting.

As the world leader in tropoelestin research, Weiss figured out how to create a perfect copy of tropoelastin from scratch in the lab. This material, called methacrylated tropoelastic (or MeTro), formed the basis of the most flexible surgical glue ever.

“We found an ethical way to make precise copies of the molecule – it’s like a photocopy machine,” Weiss explains.

“For all intents and purposes, it looks like how it forms in newborn babies’ skin. And we worked out how to tame these building blocks so they self-assemble like LEGO pieces.”

The benefit of having an exact replica of a natural protein is that MeTro doesn’t set off the patient’s immune system response, and when the job is done, it’s broken down by the body like a piece of old skin.

“We didn’t know when we started that we’d tick so many boxes,” Weiss admits. “But through some little miracle, the body sees it as being naturally incorporated, so there’s a lack of reaction like if you got a splinter or had some substance injected.”

But that’s only half the story, because for the glue to work as precisely in emergency situations, it needs a very precise trigger – light.

Let there be light

Weiss travelled to the US to meet up with friends from Harvard and Northeastern University and together they came up  with the idea to add light-activated molecules to the adhesive.

“I’ve known these colleagues for a number of years, and they have this amazing technology that involves a light-activating technique. We said wouldn’t it be cool if we combined the two technologies,” Weiss explains.

“It was just the three of us sitting down and chatting over coffee;  it’s amazing how much coffee can fuel ideas like this.”

Just like superglue, MeTro is in a syringe-like tube for easy application, and there are long-lasting or quickly dissolving varieties depending on the type of wound. Weiss says the applicators will be colour-coded so emergency responders can easily grab the right one.

Once it’s applied, a zap of UV light seals everything shut within seconds – no sutures, staples, or stiches required. And that’s when the healing begins.

Being an exact copy of tropoelastin, MeTro mimics the protein’s ability to kick-start the body’s healing process.

“We’ve been learning for many years in my lab that the material sends out signals to the body to 'heal me',” says Weiss. “It’s just incredible.”

Glue of the future

While it’s passed every test so far, MeTro still needs to go through several rounds of human trials to ensure that it’s safe and ready for the market.

Weiss says they’re now looking for funding to get that process underway, and they’ve teamed up with Sydney-based medical group Elastagen to commercialise the technology. 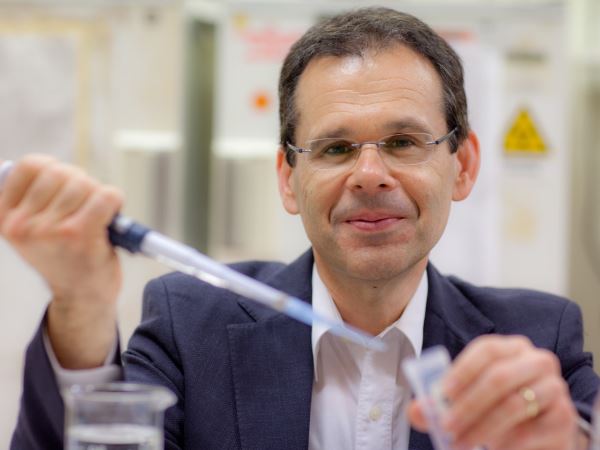 In the meantime, Weiss is also investigating technologies that could heal broken bones from the inside-out in a fraction of the time it takes using current treatments.

He says the key to making these incredible ideas a reality is getting out there and collaborating with other great minds around the world.

“My philosophy is to interact with the best and brightest in the world, because if you want to do the best, you need to work with the best,” he says.

“We do great science in Australia, and the ability to work internationally allows you to get the best possible outcomes. That’s been my philosophy from the outset – it's done through networks.” Simply having a a cup of coffee and a chat with colleagues is, in his opinion, “a powerful thing to do.”