What the historic Japan FTA means for Australian exporters 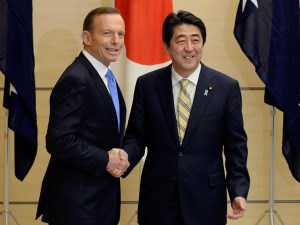 Australia this week signed a historic Economic Partnership Agreement (JAEPA) with Japan, our second-biggest trading partner with two-way trade worth over $70 billion.

So who will be the big winners under the new deal?

Under JAEPA more than 97 percent of Australia’s exports to Japan will receive preferential access or enter duty-free.

“This is the most ambitious trade deal Japan has ever concluded with anyone and affords Australia major concessions across a range of areas, most notably services and agriculture, an area of traditional sensitivity for the Japanese,” said Minister for Trade and Investment Andrew Robb.

“JAEPA represents a strong outcome for Australian beef our biggest agricultural export to Japan, as well as for fruit, vegetables, nuts, wine, seafood, processed food and other commodities, with many tariffs eliminated on entry into force.”

Mr Robb said the Australian Government would continue to push for additional outcomes through scheduled renegotiations for key agricultural products under JAEPA, and in other negotiating fora, including in the Trans-Pacific Partnership negotiations.

Effectively 100 per cent of Australia’s resources, energy and manufacturing exports will also benefit from tariff-free entry into Japan under the agreement.

JAEPA also guarantees access to the Japanese market for a range of services where Australia has an enviable reputation, including financial, legal, education and telecommunications services. Australian suppliers will also be guaranteed non-discriminatory access to the lucrative Japanese government procurement market.

“Australian consumers will also benefit from cheaper Japanese cars and parts, and a range of household items including white goods and electronics through the elimination of tariffs,” Mr Robb said.

“Japanese made components used in Australian production and manufacturing will also become more affordable which will aid our competitiveness. Cheaper Japanese imports improve consumer buying power and enhance our standards of living.”

JAEPA will afford private Japanese investment in non-sensitive areas a new screening threshold of $1.078 billion, up from $248 million.

“This agreement also sends a strong signal to Japanese investors that we both welcome their capital and are open for business, which is most important given Australia is a country that has always relied on foreign investment to develop our commerce, infrastructure and standards of living,” Mr Robb said.

JAEPA will enter into force after the completion of domestic legal and parliamentary processes by both countries, including consideration by the Joint Standing Committee on Treaties.

The deal still needs to go to the Australian parliament and has to be approved by Japan’s parliament for final ratification. The agreement is expected to be implemented late this year.

Australia’s booming agribusiness sector is perhaps the biggest winner under the new agreement.

The JAEPA will deliver:

Under the initial JAEPA, 99.7 per cent of Australia’s exports of resource, energy and manufacturing products will enter Japan duty-free.

On full implementation of JAEPA, all of Australia’s current resources, energy and manufactured goods exports will benefit from duty-free entry into Japan.

Exports of these products to Japan were worth over $42 billion in 2013.

JAEPA will provide Australian services exporters with the best treatment Japan has agreed with any other trading partner.

The full text of the agreement is available online at: www.dfat.gov.au/fta/jaepa/