‘Beginning to export can be challenging, but there are massive opportunities for Australian firms’
Karen Andrews, Minister for Industry, Science and Technology read more
Our new e-magazine is OUT NOW. Click here to read.
REGISTER ADVERTISE
SUBSCRIBE TO OUR FREE NEWSLETTER
PUBLISHED | OCTOBER 2, 2018
COMMENTS | NONE
Tweet

US and Canada seal new trade deal to replace NAFTA 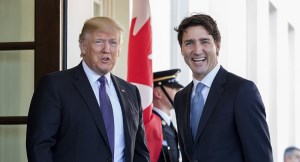 The US and Canada have finally reached agreement on a new trade deal that will replace the current North American Free Trade Agreement (NAFTA).

Recently, it was feared Canada could be excluded from the new trade agreement to replace NAFTA which has been in place since 1994.

The US made a deal with Mexico in August, but relations with Canada over the trade pact had become increasingly strained in recent weeks.

The Trump administration set a deadline of last Sunday for Canada to strike a deal.

‘Most important deal we’ve ever made’

It covers about US$1.2 trillion in trade between the nations.

US President Donald Trump hailed the new deal saying it would see a return of the United States to a "manufacturing powerhouse."

The pact is the "most important deal we've ever made by far," he said.

Canadian Prime Minister Justin Trudeau said: "It's a good day for Canada," while Mexico's Foreign Minister Luis Videgaray said it was a good deal for his country and North America.

The new USMCA is intended to last 16 years and be reviewed every six years.

In a tweet Mr Trump said USMCA was a "great deal" for all three countries and solves the "deficiencies and mistakes" in NAFTA.

What’s in the new trade deal?

The hundreds of pages of the agreement were released yesterday and contain updated arrangements for Canada's dairy industry and measures aimed at shifting lower-paid car jobs from Mexico.

Under the new agreement:

The aim is for the agreement to be signed before Mexico's President Enrique Pena Nieto leaves office on December 1.

President Trump hopes to have the deal ratified by Congress in November, however, that may be complicated by the outcome of the upcoming congressional elections.

Trump has been highly critical of the previous NAFTA agreement lambasting it as “a job-wrecking disaster” that hollowed out the nation's industrialised base.

His advisers view the trade pact as a political winner in Midwest battleground states critical to the president's 2016 victory and home to tens of thousands of auto workers and manufacturers who could benefit from the changes.

The Trump administration has not yet agreed to lift tariffs on steel and aluminium imports from Canada, a contentious issue between the two neighbours.

Under the new deal it will be harder, or at least more expensive, for car makers to use parts from outside North America, notably from China.

And US dairy farmers are getting better access to the highly protected Canadian market.

Trump believes the new deal will help to reduce the imbalance in US international trade, with individual trade partners and globally.

The US imports more than it exports and President Trump aims to change that.