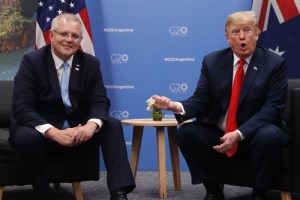 The tentative truce in the tariff war between the United States and China negotiated at the recent G20 Summit in Japan is welcome news for Australia.

Trade Minister Simon Birmingham says the new will head off a predicted further decrease in rates of global economic growth.

The International Monetary Fund (IMF) was predicting a slide in global growth from an estimated 3.6 per cent down to 3.1 per cent.

“That would have had real consequences for economies right around the world,” said Senator Birmingham.

Senator Birmingham said a future deal between China and America would provide certainty for Australia and for markets globally.

The US and China have agreed to restart trade talks and US President Donald Trump says Washington will not levy new tariffs on Chinese exports.

This has raised hopes for the world's two largest economies to resolve their trade war.

The countries have attempted to restart trade negotiations after they collapsed in May.

Several G20 leaders, including Australia’s Prime Minister Scott Morrison, have voiced concerns about the war's impact on the global economy.

In their nearly year-long dispute, the two countries have slapped tariffs on billions of dollars of each other's imports, disrupting global supply lines, roiling markets and dragging on global economic growth.

"We're right back on track and we'll see what happens," Mr Trump told reporters after meeting Chinese President Xi Jinping on the sidelines of a summit of leaders of the Group of 20 (G20) major economies in Osaka.

Mr Trump said while he would not lift existing import tariffs, he would refrain from slapping new levies on an additional $US300 billion (A$427.1 billion) worth of Chinese goods – which would have effectively extended tariffs to everything China exports to the US.

“There is a possibility that without these tensions the global rate of economic growth would be a little bit higher,” he said.

“And from that probable increase of global economic growth our own growth may be a little bit stronger as well.

“So, in that sense yes there may well have been consequences. It's built into our budget projections and what we've done there is take a careful cautious and prudent approach.

Senator Birmingham hopes trade tensions settle down because “growth in trade has been such a strong driver through recent times of growth in economic prosperity.”

“And what that has done is lift of course hundreds of millions of people out of poverty throughout our region. That's a trend that we are very committed to trying to see continue.”

Senator Birmingham said a trade deal between the two superpowers would provide a boost for China’s economy – which would be good news for Australia and for others.

“We've been critical of the application of unilateral tariff measures by the US because in the end they're hurting not just consumers in the US or in China but having that spill over effect on global economic growth everywhere.”

“It was one that canvassed a wide range of issues, security issues as well as trade issues and other areas of global cooperation,” he said. “It's one that clearly underscored the strength of the relationship between the US and Australia and that's critically important.”

Senator Birmingham agreed with President Xi that “cooperation and dialogue between China and the US are much better than friction and confrontation.”

“That is indeed exactly the right sentiment and tone expect to see from responsible global economic powers like the US and China,” Senator Birmingham said.

Also, he is confident Australia’s exemption from US tariffs on steel and aluminium will remain.

Exports of Australian aluminium were up 350% in the first quarter of this year, which according to news reports, has prompted US officials to review the decision.

However, Senator Birmingham remains confident the current agreement will be honoured following the recent discussions between Prime Minister Morrison and President Trump.

“We're working to make sure that all aspects of those arrangements – including ensuring that there aren't surges of Australian exports into the US in those categories where we've got the tariff exemption – are honoured,” he said.