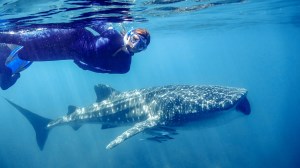 A new survey has found more tourists are venturing outside Australia’s major cities and are heading to the bush or regional coastal towns for their holidays, driving annual spending above $113 billion last year.

“Australia’s tourism industry continues to see strong growth and our regions are starting to reap the benefits,” said Minister for Trade, Tourism and Investment Simon Birmingham.

“These latest results show 2.84 million international travellers chose to travel beyond our capital cities and spent time in the bush, at the coast or even in the outback, he said.

”This is great news for regional towns around Australia and it’s also terrific to see travellers moving off the beaten track.

“This is exactly why 80 per cent of Tourism Australia’s current campaigns, feature tourism experiences outside of our capital cities.”

For example, tourists are inspired to swim with whale sharks on WA’s Ningaloo reef.

“Our government continues to deliver record funding to Tourism Australia for cutting-edge campaigns such as Undiscover and Dundee, and these latest results demonstrate how these campaigns are helping to lure more tourists down under,” Senator Birmingham said.

“Whilst we’re still seeing strong numbers in the major cities, our current focus is getting travellers to stay an extra few days and get a taste for the rest of Australia.

“With forty-three cents in every tourism dollar is spent in regional Australia, every single dollar makes a big difference to small businesses and local communities.”

Through its Building Better Regions Fund the government has set aside up to $45 million for tourism infrastructure projects so local communities in regional areas can seize on local tourism opportunities.

Regional destinations also continue to be popular for Aussies with domestic spending in regional Australia increasing 10 per cent to $36.2 billion during the year.

“More and more Australians are turning to nature for their holidays, whether it be kayaking near Cradle Mountain in Tassie, cycling in the Blue Mountains in NSW or bushwalking in the Bungle Bungle Range in WA,” said Senator Birmingham.

Domestic visitors spent a record $70.3 billion to the year ending September 2018 in Australia on tourism, a 10 per cent increase, whilst international visitors are also spending record amounts with spending up 5 per cent to $43.2 billion.

“More Aussies holidaying in our own backyard teamed with this record spending is a great boost for Australian businesses and helps contribute to a stronger economy,” Minister Birmingham said.

“With 1 in 13 Australians already employed in the tourism industry, these strong results will only help to create more jobs for Australians.”

China continues to be the number country for visitors, with numbers up 8 per cent to 1.3 million. Visitors from India increased by 20 per cent to 324,000, and there was good growth in the number of arrivals from Japan, up 6 per cent to 419,000.