'USMCA is the most important deal we've ever made by far’
US President Donald Trump read more
Our new e-magazine is OUT NOW. Click here to read.
REGISTER ADVERTISE
SUBSCRIBE TO OUR FREE NEWSLETTER
PUBLISHED | FEBRUARY 23, 2016
COMMENTS | NONE
Tweet

A wine bottling plant to give Australian wine a more direct path into the booming Chinese market has opened in South Australia.

Harbour Bottling has opened its plant with a 20,000 bottle a day capacity just 4km from Adelaide’s major shipping container port.

Set up by four Chinese entrepreneurs, Harbour Bottling is closely linked to South Australian wine company Orchid Wine Estate, which was founded in 2013 and exports about 200 containers of wine per year.

About 30 per cent of the wine produced at the winery will be badged as Orchid Wine Estate while about 70 per cent will be sold to Chinese wine companies to be badged as their own.

The mainly red wine, including shiraz, cabernet sauvignon, grenache/shiraz blends and merlot is then made under contract by major wineries in various regions.

Harbour Bottling Managing Director Jason Zhao said Chinese consumers had developed a taste for Australian wines but were now looking for more everyday wines as opposed to the super premium Barossa Valley brands like Grange and Henschke that made inroads into Asia a decade ago. 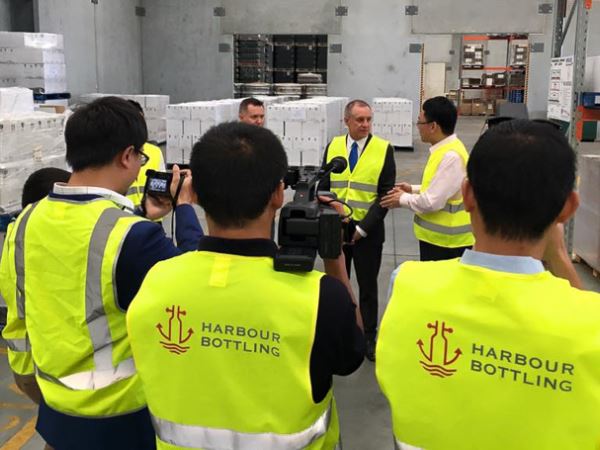 “There is a really good reputation in China for Australian wines but the prices not everyone can afford so what we cater for is we give the consumer more choice while still being able to enjoy the quality standard of Australian wine,” Zhao said.

“In China there is a lot of potential to go further, especially for Australian wines.”

The Wine Australia Export Report December 2015 shows that the value of Australian wine exports jumped 14 per cent to $2.1 billion in 2015, reaching its highest growth in value since October 2007.

The strongest growth was in China, Australia’s third biggest export market behind the United States and United Kingdom, which grew 66 per cent to $370 million.

“The Chinese consumers can easily identify the wines that come from new world and the information on the labels is easy for them to understand.”

The bottling plant began operating on January 28 and has the ability to double its capacity by working around the clock if demand continues to increase.

There are further plans for another bottling line to be built if the company sustains long-term growth.

Zhao studied oenology and has a background in winemaking while his Orchard Wine Estates co-founder Jonathon Li grew up in a family heavily involved in the wine industry in China.

Zhao said having a Chinese background and Chinese language was a big advantage to bringing Australian wine into China.

He said bottling and labeling wine in Australia before sending it to China meant companies could ensure quality and brand reputation was maintained.

“We think there is a lot of opportunity there, especially for Australian wine, the people like it but they think the wine should be bottled here locally.”

Just down the road from Harbour Bottling, Australian Global Wine Services, in conjunction with Red Capital Pty Ltd, has announced plans to build a large bottling, storage and container facility at Port Adelaide, which will cater predominately to the wine industry.

Construction is expected to begin this month on Stage 1 of the $55 million venture.

South Australian Premier Jay Weatherill said South Australia was the logical choice as the site for the new venture because it was the largest wine producing state in the country for domestic and export product.

“This investment came about after Australian Global Wine Services identified a shortage in South Australia’s bottling capacity as well as an expected increase in future demand due to increased exports to Asia and a reduction of bulk wine export,” Mr Weatherill said.