'USMCA is the most important deal we've ever made by far’
US President Donald Trump read more
Our new e-magazine is OUT NOW. Click here to read.
REGISTER ADVERTISE
SUBSCRIBE TO OUR FREE NEWSLETTER
PUBLISHED | NOVEMBER 13, 2017
COMMENTS | NONE
Tweet 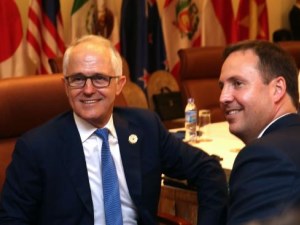 Trade ministers from 11 Pacific Rim countries including Australia have reached a deal to proceed with the free-trade Trans-Pacific Partnership deal.

"We have reached an agreement on a number of fundamental parts," Vietnam's trade minister, Tran Tuan Anh, told reporters in the coastal resort city of Da Nang, on the sidelines of the Asia-Pacific Economic Cooperation (APEC) forum.

But more work needed to be done before leaders of the countries involved can endorse the plan, Mr Anh and Japanese Economy Minister, Toshimitsu Motegi said.

"We have overcome the hardest part," Mr Tuan Anh told the news conference.

The 11 countries remaining in the trade pact have been working to revise the deal following the decision by the US earlier this year to pull out of the agreement.

US President Donald Trump ditched the TPP in favour of an "America First" policy he believes will save US jobs.

At a speech in Danang, Mr Trump made it clear he was only interested in bilateral deals in Asia that would never put the United States at a disadvantage.

Agreement to be re-named

The revised agreement will now be known as the Comprehensive and Progressive Agreement for Trans-Pacific Partnership. (CPTPP)

The announcement of a basic agreement was expected on Friday, but was delayed when Canadian Prime Minister Justin Trudeau did not join other leaders to endorse the agreement.

Canada's trade minister later blamed Trudeau's absence on "a misunderstanding about the schedule".

Canada, which has the second biggest economy among remaining TPP countries after Japan, had said it wanted to ensure the agreement would protect jobs.

Canada's position has been further complicated by the fact that it is simultaneously renegotiating the North American Free Trade Agreement with the Trump administration.

Mr Motegi said it was clear there would be a need for further changes, but differences had been narrowed down.

"The substance is something all the TPP countries can agree on," Mr Motegi said.

Mr Motegi hoped that moving ahead with the trade deal would be a step towards bringing back the United States.

Partly to counter China's growing dominance in Asia, Japan had been lobbying hard for the TPP pact, which aims to eliminate tariffs on industrial and farm products across the 11-nation bloc including Australia, whose trade totalled $US356 billion ($A498 billion) last year.

To reach agreement on pushing ahead with the deal, 20 provisions of the original agreement will be suspended, Mr Motegi said.

The agreement will take effect after ratification by six of the 11 members.

Besides the tariff cuts, the TPP agreement has provisions for protecting the environment, workers' rights and intellectual property – one of the major sticking points after the departure of the United States.