‘UK wine exports are at their highest level in a decade’
Rachel Triggs, Wine Australia read more
Our new e-magazine is OUT NOW. Click here to read.
REGISTER ADVERTISE
SUBSCRIBE TO OUR FREE NEWSLETTER
PUBLISHED | NOVEMBER 30, 2018
COMMENTS | NONE
Tweet 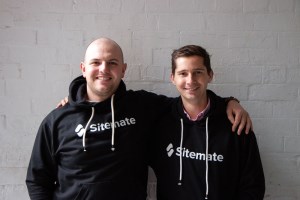 Sitemate, a project management startup focused on the construction industry, has secured $1.3 million in venture capital funds to expand its business internationally.

The company, launched out of the University of Sydney’s UTS Startup program in 2015, rebranded just last month after previously being named Construction Cloud.

The two mates have developed a platform to provide shared workflow documents for industrial projects, including financial documents, commercial record-keeping and environmental and safety workflows.

The software can also be used in the mining, energy, utilities, oil and gas industries, Pike says.

In just three years, Pike has gone from site engineer to running a multi-million dollar tech startup with users in 40 countries.

The venture capital funds raised in September will enable the company to grow to 30 staff next year. The team has plans to build their marketing and sales teams, as well as investing in product and engineering staff.

The funding was raised with support from the NSW Government-backed Jobs for NSW program.

“Jobs for NSW has been there from the start with Sitemate, having provided the company with a $15,000 MVP grant to develop its technology and then a further $100,000 to support the company’s next stage of growth,” said NSW Deputy Premier John Barilaro.

Pike said the Jobs for NSW support had been crucial in stepping the company through to the next stage of growth and securing funding of $1.3 million from Artesian, Sydney Angels and other angel investors.

“Without that support from Jobs for NSW I honestly don’t know if we would have made it through because you need to invest a lot of time and effort upfront to understand the customer’s needs and build the product correctly.

Strong interest from US and UK

“This funding will allow us to put some firepower into our engineering and marketing efforts to build our team and grow our brand. Over the next 18-24 months we will also look to capitalise on strong interest in the US and UK.”

Pike said the technology was developed after he experienced frustration with information sharing on construction sites around Sydney.

“A lot of sites were managed in thousands of different versions of spreadsheets and the projects were becoming more complex, increasing the risk for everyone. A lack of a central platform was a problem every day, on every project for every company.

“A big project might employ hundreds of contractors but none of them are connected in real time – that’s what we’re trying to achieve with Sitemate."