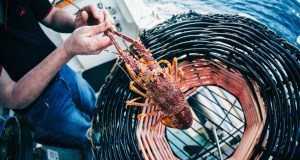 The Southern Rock Lobster (Jasus edwardsii) is among the most sought after lobster in the world and is only found in the waters of southern Australia and New Zealand.

Of the 3000 metric tonnes Australia processes commercially each year, about 53 per cent is caught in South Australia, 37 per cent in Tasmania and 10 per cent in Victoria.

The South Australian fishery is split into a southern and northern zone. The southern zone season opened on October 1 while the northern zone begins on November 1 with both fisheries operating until May 31.

Fisherman in the southern zone have reported good conditions and strong catches in the first two weeks of the season with good prices driven by high demand from China.

South Australian company Ferguson Australia is a major player, processing and marketing about 450 tonnes of Southern Rock Lobster a year.

China buys the majority of its catch while small amounts are shipped to markets such as Hong Kong, Korea, Malaysia and Singapore.

Ferguson Australia buys from fishermen in the southern and northern zones and transfers the live lobsters to tanks at its processing plants in Port MacDonnell, Kangaroo Island and Adelaide.

The lobsters are then cooled to about 6° or 7°C where they go into a dormant state and are packed into chill boxes before being trucked to Melbourne or Adelaide airports and airfreighted to China overnight.

Ferguson Australia managing director Andrew Ferguson said although the rock lobsters could easily survive for up to 30 hours out of water, the product he exported was generally back in a live tank in China about 20 hours after leaving the water in South Australia.

He said favourable weather, solid catches and strong demand had led to a “fantastic start overall” to the season with a landing price in China of between $99 and $140 per kilogram.

“It’s slightly up on last year, particularly at the start, and that’s mainly because of the supply into China,” Ferguson said.

“There’s certainly demand for the stock – October is a good month because there are plenty of celebrations like weddings that drive demand.

“This time of the year we seem to get the market to ourselves but as we move on other global competitive markets come on so it’s just the timing of when we can supply and others can’t.”

Ferguson Australia will begin buying this season’s catch from fishermen in the northern zone, where it also owns seven commercial fishing boats, from November 1.

The final portion of a 10 per cent tariff on Australian lobsters in China will be eliminated on January 1.

According to the Australian Department of Foreign Affairs and Trade, the China Australia Free Trade Agreement will create a huge opportunity for locally produced seafood on the Chinese market.

Since the China-New Zealand Free Trade Agreement came into force in 2008, China’s imports of seafood from New Zealand have grown five-fold.

Ferguson Australia has opened an office in Shenzhen, has a Chinese salesperson on the ground and regularly attends trade shows to meet new prospective customers.

Ferguson said the FTA would also allow Southern Rock Lobster exporters to get product into parts of China that were previously inaccessible.

He said selling directly to niche suppliers like top end restaurants and wedding houses was the way to further grow the value of their lobster sales in China.

“The niches are growing – we are not so reliant on the big wholesalers but we are supplying many more smaller customers and we’re looking for those niches in the market that we weren’t able to access before the free trade agreement,” Ferguson said.

“There’s a fair difference between the price of a lobster at the wholesale market to when it ends up on the plate and even if we don’t get right to the end, if we can get half way along that chain, it makes a big difference to what’s attained back here on the beach.”

Third generation Southern Rock Lobster fisherman Joel Redman said the catch rates and beach prices of between $78 and $122 a kilogram had led to “everyone being reasonably happy” in the first few weeks of fishing in the southern region.

He said the Southern Ocean fishery had bounced back the past two years after several below average seasons between 2009 and 2016.

“Catch rates are good again – last year was pretty good but this year is probably better and more widespread across the zone so there is certainly some upside there and the health of the fish is a lot better than the last couple of years,” Redman said.

“I think people are reasonably confident about where the fishery is headed, which is pretty comforting and is good for investment values and keeps the market happy.”

Redman said greater confidence in the fishery allowed many fishermen to time their intense fishing periods with major celebrations in China, such as Chinese New Year and May Day.

He said the FTA and more export options would potentially help smooth out the peaks and troughs of the market.

“The Chinese market when it is strong they’ll take almost as many tonnes as we can land between Australia and New Zealand at good prices but when there’s a down time the market will go quite dead,” Redman said.

“Traditionally the market has been restricted to three or four southern provinces around Hong Kong and just north of Vietnam whereas now the ability for the fish to move deeper into the Chinese market is providing a little more consistency around the ability to be able to clear those fish.

“The fishermen can’t do what they do without solid exporters and the exporters need the fishermen and the fishery to be in good condition so they can maximise their opportunity with consistent supply – it’s a hand-in-hand arrangement.”

The New Zealand Southern Rock Lobster Total Allowable Commercial Catch for 2018/19 has been set at 1585 tonnes, a little over half of Australia’s supply.

Western Australia is also a large producer and exporter of lobster with a TACC for 2018/19 of 5500 tonnes. While more abundant and still popular in China, its Western Rock Lobster (Panulirus cygnus) does not have quite the same status in Asia.

“We’re very lucky because the way Southern Rock Lobster looks and presents itself is highly sought after by Chinese consumers,” he said.

“It’s red with golden legs that point down, it has horns like a dragon and it’s considered to be one of the most premium varieties of lobster in the world.”