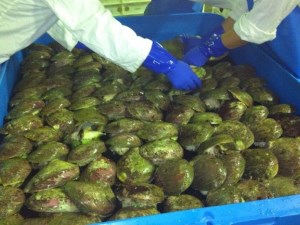 Fresh is best – especially when it comes to seafood.

And the transportation of live seafood around the globe has always been a challenge for exporters.

FishPac, an innovative system for the transportation of live seafood, has revolutionised live aquatic transport.

The Australian Made system has achieved amazing results since its launch some 15 years ago.

FishPac is the world’s only approved supplier of equipment for the transport of air freighted live aquatic animals sustained with oxygen.

An estimated 230,000 bins of live seafood have been shipped since the product was first launched in 2000.

With each bin holding about 320kg of live fish and marine life, this equates to a total of 74 million kilograms.

The unique bins are now used in in Australia, USA, Canada, Indonesia, the Maldives, Philippines, Taiwan, and Vietnam.

And new customers have recently come on board in Mauritius, Madagascar, South America, India, Sri Lanka, and Germany.

FishPac estimates it has saved the use of six million polystyrene boxes – an impressive result for the environment.

The system has also saved about 8 million kilograms of live seafood from perishing in transit.

According to FishPac management, its average mortality is 1 percent, compared with 12 percent with polystyrene boxes.

But Gavin Hodgins, General Manager of FloatPac Pty Ltd, the company that owns FishPac, says a new industry benchmark has been achieved in keeping the premium, fragile species alive.

“This has been achieved with 500kg payloads with zero deaths – a feat that has never been seen before,” Mr Hodgins said.

“We have also seen some clients’ shipments reach a staggering 65 hours of transit time with very low oxygen use levels for species like King Crab.

“These are the sort of numbers the entire seafood industry has only ever dreamt about in the past. FishPac is now making these possibilities a reality.”

Mr Hodgins says FishPac clients are seeing a 100 percent return on investment in as little as three months when converting to FishPac’s system.

The company is constantly seeking new markets and eventually expects to crack the lucrative China market.

“With the new free trade agreement we have had a great deal of interest from the local seafood industry,” says Mr Hodgins.

“But the big issue for us is being able to land ‘dangerous’ goods on aircraft there,” he says.

“The Chinese have a different interpretation to other countries and approvals are more difficult.

“It is a very hard market to crack.

“But we are working closely with authorities and I have confidence we will be given approval eventually.

“There is still plenty of water to flow under the bridge before that happens.”

About 90 percent of the world’s live seafood is now sent to Hong Kong before being moved to mainland China, says Mr Hodgins.

His company is constantly sourcing new species for export.

Mr Hodgins says there is growing demand globally for live seafood – particularly from China and other Asian nations.

“As the population becomes more affluent and the middle class grows, there is a strong demand for better quality food,” he says.

“There is also strong demand (for live seafood) from cities such as Los Angeles which has a large Asian population.”

FishPac equipment can be used in the transport of live fish and fingerlings via air, road and rail freight.

The FishPac system operates by sustaining the fish/fingerlings with oxygen. The oxygen flows from an approved air/oxygen cylinder through the FishPac regulator (which has a worldwide patent) and is dispersed in StackPac via a ceramic diffuser.

FishPac works with seafood exporting companies and airlines around the world.

The FishPac bins are available for purchase, however due to IATA transport regulations the two-stage oxygen regulator is available for lease only.