‘UK wine exports are at their highest level in a decade’
Rachel Triggs, Wine Australia read more
Our new e-magazine is OUT NOW. Click here to read.
REGISTER ADVERTISE
SUBSCRIBE TO OUR FREE NEWSLETTER
PUBLISHED | NOVEMBER 17, 2014
COMMENTS | NONE
Tweet

Rinehart’s formula for success in China 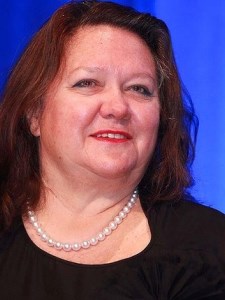 Mining tycoon Gina Rinehart is looking to expand her business empire with a $500 million investment in a dairy farm to meet soaring demand for premium infant formula in China.

Ms Rinehart's Hope Dairies has acquired about 5,000ha of prime farmland in Queensland which will produce an estimated 30,000 tonnes of infant formula (about 35 million tins) for export to China a year.

The first exports are expected to begin in late 2016.

"Australia has some of the finest agricultural products in the world and we need to position ourselves to meet the demands of our region," Ms Rinehart said following the signing of an agreement with the Queensland government and her Chinese partners in Brisbane.

Demand for infant formula is growing sharply in China after the country's government relaxed its one-child policy last year and is expected to double within three years.

China's imports of milk and milk powder soared 70 per cent in the first half of the year to 830,000 tonnes, customs data showed. Infant milk formula sales in China are forecast to double from last year to US$31 billion by 2017, according to research firm Euromonitor.

China now only imports infant formula from countries like Australia with a reputation for safe food production practices.

Ms Rinehart is Australia's richest person and one of the richest women in the world with an estimated fortune of $US15.5 billion ($A16.77 billion) according to Forbes.