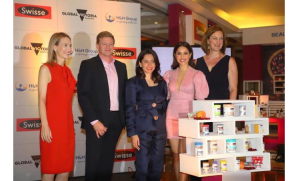 E-commerce is a game-changer for Australian brands exporting consumer goods to India.

With the help of Austrade advisors in Melbourne and New Delhi, the supplements icon, Swisse, launched with Amazon India in February this year, driving strong sales growth across the subcontinent.

Based in Victoria, Swisse is a vitamins, supplements and skincare brand that manufactures all its products to Australian pharmaceutical standards. The Swisse brand is gaining global traction. Over the past decade, its nutraceuticals have become popular across the Asia-

Last year, the company set its sights on India. According to Akash Bedi, Group Chief Strategy & Operations Officer for H&H Group, India was the logical next step for Swisse’s market expansion progression.

“We looked at growth trajectories for our target customers and saw that India is now a major, long-term opportunity for premium consumer goods — regardless of short-term challenges,” Bedi said.

“India is now a major market for consumer goods and a logical next step for companies that have built successful brands in India,” he says.

India presents exporters with unfamiliar hurdles, however. Regulation is often highly complex. Warehousing can be difficult to arrange. To try to understand the challenges – and devise solutions – Swisse reached out to Austrade’s market advisors.

“Austrade advisers gave us their ‘tales from the trenches’, so we could figure out what’s going on in India’s FMCG [fast moving consumer goods] market,” says Bedi. “These professional insights supplemented the picture we built up from market research from other sources.”

To mitigate risk, Swisse decided on an all-digital entry strategy. This would enable Swisse to build its brand without having to negotiate distribution agreements, or invest in traditional advertising. But to execute a digital strategy, Swisse needed an e-commerce partner.

Austrade had already worked with Amazon in Asia. So, when Amazon India announced a roadshow tour in Australia, Delhi-based Trade and Investment Commissioner Dr Mark Morley, began bringing companies together.

“Amazon India could give us access to millions of consumers,” says Bedi. “Also they could help with logistics and distribution.

“Austrade advisors helped us validate our India market-entry strategy,” he adds. “We exchanged scores of emails as we developed our ideas. I would recommend any company thinking of launching in India to consult with Austrade before going forward.”

The trigger for Swisse’s launch in India was the Australia-India Business Exchange (AIBX) in February. Organised by Austrade, AIBX was a high-profile business delegation to India led by Australia’s Minister for Trade, Tourism and Investment, Simon Birmingham.

“We had participated in Austrade events in the US and Korea, so we knew their value,” says Bedi. “These trade events deliver good commercial outcomes for us, and we can leverage Australia’s reputation as a source of high-quality produce.”

Swisse had intended to mount a “soft-launch” of its brand during the AIBX visit, but as collaboration increased – with Amazon India, Austrade and the state agency, Global Victoria – the possibility of a full-scale product launch became more viable.

“As February approached we progressed faster than expected, so we launched Swisse in Bangalore with Trade Minister Birmingham, Nick Mann, Managing Director for Swisse ANZ and the Amazon team all in attendance,” says Bedi. “It was a big success: we became the first Australian brand to go live on Amazon’s Australian store in India.”

“We helped to organise interviews with newspapers and meetings with India’s FSSAI (Food Safety and Standards Authority of India),” says Austrade’s Siddiqui.

“Austrade has excellent people on the ground who helped us to manage public relations,” says Bedi. “Also, Austrade’s India staff gave us a list of pre-qualified leads who could provide support services and commercial assistance. They made appointments with vital stakeholders and this meant we hit the ground running.

“During the trip we did deals with a number of strategic e-commerce platforms including, Nykaa, 1mg, Healthkart, Snapdeal, Health & Glow, Netmeds, Purplle, Pharmeasy, Myntra and others.”

When Amazon India launched its Australia Store in February, it showcased just 12 Australian brands. By October, there were 37 on the site. They included Capilano, Carman’s, San Remo, and Sand and Sky Australia. According to Siddiqui, there are about eight comparable e-commerce platforms in India, broadening the commercial horizon for Australian exporters.

“We continue to work with Swisse – helping them to explore sales opportunities and understand labelling requirements,” says Siddiqui. “In India, e-commerce is a game-changer for exporters. Our role is to help brands get up and running in India, so we are eager to connect Australian exporters to e-commerce platforms.”

The prospects for Swisse look excellent. India’s middle class is rapidly developing a taste for premium produce with wellness connotations. Bedi says Swisse is not so much entering an existing market as creating a new one by stimulating demand for nutritional products.

“We believe that, for Swisse, India will prove as valuable a market as our other export markets,” he says. “Technology and retail are at different stages of development in India and there are many complications. But having launched, we know that India will be a major market for us in the future.”

“As a global team, we will also help Swisse replicate their Indian e-commence success in other global markets.”