New centre of excellence to conduct research on global trade 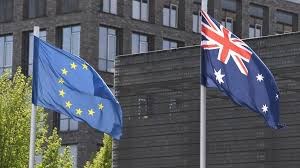 A new centre of excellence conducting research into global trade and affairs has been launched at the University of Adelaide.

The Jean Monnet Centre of Excellence in International Trade and Global Affairs will foster research on the European Union (EU) and its relations with Australia.

It will also offer courses on European economic integration and sponsor study tours to Europe.

“At this time, when the political and economic landscape is changing in the context of Brexit, understanding of Europe has never been so relevant,” says the University’s Professor Richard Pomfret, Jean Monnet Chair on the Economics of European Integration, who will head the new centre.

“The Jean Monnet Centre of Excellence in International Trade and Global Affairs will conduct research and provide information on the European Union through a series of events and activities which will provide a forum for the exchange of knowledge and ideas between academics, policy makers, local businesses, teachers, tertiary and secondary school students and others with an interest in the European Union."

“This is an exciting initiative to increase the capacity of Australian academic institutions and to look at Australia European Union relations,” Senator Birmingham said.

The centre would focus on securing the best deal for a future free trade agreement with the EU and deliver benefits to both our economies.

“Australia and the EU are critical partners,” Senator Birmingham said. “The European Union is Australia's second largest trading partner and we want to ensure that our future relations are rich in strong trade and commerce.”

Senator Birmingham said the new centre would play a key role in advancing knowledge around trade.

“It comes at a very opportune moment in time with the decisions that have been made to launch and to proceed with the Australia EU free trade agreement negotiations,” he said.

“These negotiations are proceeding well but we want to see as ambitious and comprehensive a Free Trade Agreement as possible between Australia and the EU and I'm sure that this academic work will help to enhance those deliberations.”

Rich and historical ties with the EU

Dr Peter Draper, Executive Director, IIT, the University of Adelaide, said the University has won more than $1 million from the EU to fund the new centre and to coordinate an international network of academics specialising in trade research.

“The Jean Monnet Centre of Excellence is a further step in the University’s relations with the EU and will build on its history of signature research into the EU,” Dr Draper said.

“Australia enjoys rich and historical ties with the EU, a relationship that will only grow stronger beyond Brexit.

“I hope the centre will have an important role in developing new and innovative educational offerings that will stimulate public policy debate and contribute to the development of effective trade policy for many years to come.”