‘Beginning to export can be challenging, but there are massive opportunities for Australian firms’
Karen Andrews, Minister for Industry, Science and Technology read more
Our new e-magazine is OUT NOW. Click here to read.
REGISTER ADVERTISE
SUBSCRIBE TO OUR FREE NEWSLETTER
PUBLISHED | FEBRUARY 12, 2018
COMMENTS | NONE
Tweet

Modelling the TPP: not should we, but can we? 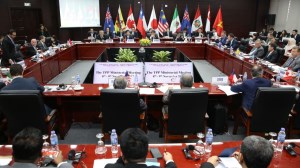 Now the 11 countries in the Comprehensive and Progressive Agreement for Trans Pacific Partnership (or TPP11) have concluded negotiations, modelling is emerging as a major point of disagreement in Australia.

But the question of whether to model the TPP11 is premature. The first question should be: can the TPP11 credibly be modelled?

In 2016 the World Bank modelled the impact of the TPP12 (TPP11 plus the US and some US-friendly provisions). It found the economic benefit for Australia would be 0.7% of GDP. In 2017, the internationally-respected Peterson Institute for International Economics found that without the US, Australia would do better out of the TPP11 than the TPP12.

But critics of the TPP11 see these studies as flawed. Instead, many are calling for the Productivity Commission to model the agreement.

As with the World Bank and Peterson Institute modelling, a PC model would mainly focus on tariff reductions. It would need to make complex and uncertain assumptions to incorporate other aspects of the TPP, such as streamlined customs processes, services access, ISDS, IP, rules to govern data localisation requirements and movement of people (to name a few).

The TPP has an additional layer of complexity. It has benefits for any regional value chains in which Australia is involved. Value chains involve a product (or its components) moving between countries multiple times. The TPP will mean value chains between members can operate more smoothly and at a lower cost. Far from being able to model value chains, statisticians only relatively recently worked out a methodology to measure them.

Then there are the intangibles

When Donald Trump pulled the US out of the TPP12, it allowed the remaining parties to modify the agreement to exclude some of the more controversial concessions the US extracted from the other parties (particularly those related to IP). This means that while the benefits of market access might be less, the political cost of joining is also less. The net result is that the TPP11 appears to be more attractive to new entrants.

It is almost certain that one or more countries will join the TPP11 – South Korea, Thailand, the Philippines, Indonesia, Taiwan and even the UK have expressed interest in joining. More members will make the agreements more valuable to its members, in turn making it more attractive for others to join.

To be credible, TPP modelling should look at scenarios where new members join.

Perhaps more importantly, each new member increases chance of the TPP11 forming the basis for the next evolution in regional trading rules. (The US’s original intent behind the TPP12 in the first place.) As one of the leading players within the TPP11, Australia is positioned to have substantial influence over this evolution. The value of this shouldn’t be underestimated. It also can’t be modelled.

Conversely, there would be costs to pulling out. There has been clear damage to the US’s international standing caused by Trump’s decision to back out of the TPP12. Australia has invested significant political capital to get the TPP11 to this point. If Australia now fails to ratify the agreement, there will be real, but hard-to-measure costs to reputation and credibility.

To model, or not to model?

None of this is to say modelling free trade agreements is a bad idea. Labor has made a welcome commitment to commission independent modelling of new agreements, and existing agreements after ten years.

It would be hugely valuable to review existing agreements and assess the impact of the provisions in them. This would give the government an evidence base from which to improve those agreements.

Learnings from reviewing past FTAs could be used as the basis to credibly model and improve agreements under negotiation. But this would be a multi-year endeavour.

The value of the TPP11 should be rigorously debated and individual provisions scrutinised.

But pushing the PC to rush out a model for the most complex trade agreement Australia has entered into wouldn’t satisfy anyone.

Heath Baker is Head of Policy, Export Council of Australia