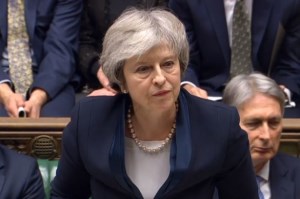 The UK Parliament has voted to reject a no-deal Brexit, paving the way for a vote to seek a delay to the UK's departure from the European Union.

MPs are concerned that leaving the EU without a deal on March 29 (the EU deadline) would damage the UK economy.

However, the vote is not binding – under current law the UK could still leave without a deal on March 29.

The second vote was on a government motion, which said the UK should not leave the EU without a deal on 29 March, but with the option of a no-deal Brexit at any other time.

The government wanted to keep control of the Brexit process, and keep no-deal on the table, so they ordered Conservative MPs to vote against their own motion.

That tactic failed. Government ministers defied those orders and there were claims British PM Theresa May had lost control of her party.

Tomorrow, MPs will be asked if they want to delay Brexit until June 30 – to allow the necessary legislation to get through Parliament.

But that is only if MPs back Mrs May's deal by March 20, the government says.

If they fail to back her deal by then, then the delay could be longer.

The PM warned MPs it could clash with the European Parliament elections in May.

"I do not think that would be the right outcome. But the House needs to face up to the consequences of the decisions it has taken," she said.

That means Theresa May could make a third attempt to get her deal through Parliament in the next few days.

Work and pensions minister Sarah Newton voted against the orders of the whips and has now resigned.

Mr Mundell said he backed the PM's deal and had always made clear his opposition to a no-deal Brexit.

A European Commission spokesperson said: "There are only two ways to leave the EU: with or without a deal. The EU is prepared for both.

"To take no deal off the table, it is not enough to vote against no deal – you have to agree to a deal.

"We have agreed a deal with the prime minister and the EU is ready to sign it."