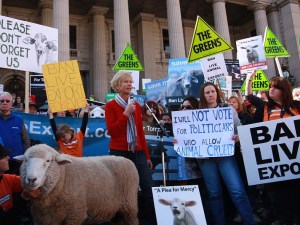 Shocking images of Australian cattle being sledgehammered to death in Vietnamese slaughterhouses has renewed calls for a ban on live animal exports.

Animal welfare groups fear many of the 311,000 live cattle exported yearly to Vietnam are being slaughtered brutally in abattoirs not approved by Australian authorities.

This has again thrown the future of Australia’s $1.8 billion live cattle trade into doubt.

Animals Australia, which filmed and released the most recent footage of Australian cattle being sledgehammered and blud­geoned to death, has called for all exports of live cattle to Vietnam to be suspended.

Opposition Leader Bill Shorten has backed the immediate halt of cattle shipments to suspect Vietnamese meatworks, while Prime Minister Malcolm Turnbull says he is  “deeply disturbed” by the ­images.

However, Deputy Prime Minister Barnaby Joyce ruled out a live export ban pending an investigation by the federal Agriculture Department.

The system was introduced in 2011 to improve animal welfare standards abroad and prevent a repeat of the barbaric cruelty towards Australian cattle uncovered in Indonesia abattoirs.

“Five years ago, we were promised by the live export industry and the government that this system would ensure that Australian cattle would be slaughtered accord­ing to minimum requirements,” Dr Jones said.

“(This latest footage) shows Australian animals are still facing shocking treatment within and outside Australian government-approved slaughterhouses; (even) the live export industry has admitted it has lost control in Vietnam.”

Agriculture Department officials are now investigating the malpractices detailed by Animals Australia in its official complaint.

They occurred in non-approved village slaughterhouses and in some of the 120 Vietnamese meatworks authorised to receive and kill cattle under Australia’s strict ESCAS requirements.

ALEC chief executive Alison Penfold described the footage from inside the Vietnamese abattoir as sickening.

"No amount of times watching those animals suffer will lessen how sick and disgusting it is and makes me feel," she said.

Ms Penfold said the council said it would begin a three-month inquiry into traceability and control practices of animal welfare requirements in Vietnam.

“We are the only country that traces the welfare of animals right through the supply chain, so this is being investigated (by the Agricul­t­ure Department and Vietnamese authorities),” Mr Turnbull said.

Last Saturday about 250 people staged a rally outside the SA Parliament to protest against live animal exports.

The rally, organised by the Animal Justice Party (AJP), was an attempt to put animal welfare on the federal election agenda.

The party's number one South Australian Senate candidate, Tania Noble, said there were strong feelings in the community about the live export trade.

"People are sick and tired of being fobbed off by politicians when they express their concern about animal cruelty, especially after the latest outrage in Vietnam," Ms Noble said