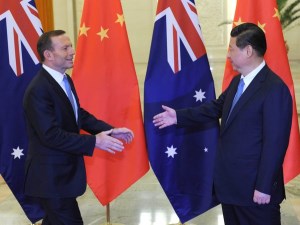 Under the new agreement Australian businesses will have unprecedented access to the world’s second largest economy.

In a joint statement Mr Abbott and Mr Robb said the new agreement would greatly enhance Australia’s competitive position in key areas such as agriculture, resources and energy, manufacturing exports, services and investment.

Under the deal, 85 per cent of all Australian exports will enter China tariff-free. This is expected to rise to 93 per cent within four years and 95 per cent when the deal is fully in force in more than a decade.

The deal is conservatively estimated to be worth at least $18 billion over a decade to the Australian economy.

It comes after 10 years of negotiations with China and gives the government a trifecta of trade agreements this year, after the deals with Japan and South Korea.

It will cement China’s relationship as Australia’s biggest trading partner, with two-way trade worth more than $150bn a year.

Mr Robb said the FTA with China would add billions to the economy, create jobs and drive higher living standards for Australians.

Australian households and businesses would reap the benefits of cheaper goods and components from China such as vehicles, household goods, electronics and clothing, placing downward pressure on the cost of living and the cost of doing business.

Significantly, tariffs will be abolished for Australia’s $13 billion dairy industry.

Australia’s beef and sheep farmers will also gain from the abolition of tariffs ranging from 12-25 per cent and all tariffs on Australian horticulture will be eliminated.

Tariffs on Australian wine of 14 to 30 per cent will go within four years, while restrictive tariffs on a wide range of seafood, including abalone, rock lobster, and southern bluefin tuna will also cease within four years.

However, the Australian Government failed to gain a deal for cotton, wheat, sugar, rice and oilseed farmers after the two sides could not agree on China's demand for greater investment access for its state-owned enterprises.

But both parties agreed to revisit any outstanding issues in three years.

Tariffs will also be removed on a range of Australian resources and energy products, including the eight per cent tariff on aluminium oxide on the first day of the Agreement, benefitting our exports worth around $1.3 billion a year.

The tariffs on coking coal will be removed on day one, with the tariff on thermal coal phasing out over two years.

Tariffs will be also eliminated on a wide range of Australian manufactured goods, including pharmaceutical products and car engines.

The Australian Government has secured the best ever market access provided to a foreign country by China on services, with enormous scope to build on an export market already worth $7 billion.

"China realises if it is to become a domestically focused economy it will be a service-based economy overwhelmingly," Mr Robb said.

Asian middle-classes are expected to grow from 600 million to three billion over the next 30 years.

"They will need our services," he said.

Services make up one of the five pillars of the agreement, the others being agriculture, resources and energy, manufacturing exports and investment.

The deal will dramatically expand opportunities for bankers, insurance companies and legal firms. Banks will gain increased transparency and streamlining in financial services licence applications, including reduced approval times for firms wanting to trade in the Chinese currency.

Legal firms will be able to establish commercial operations in the Shanghai free-trade zone that will be allowed to service the whole of China.

Architectural and urban planning professionals will gain reciprocal recognition of their qualifications.

Educational institutions and training providers will win increased promotion from the Chinese government.

The number of educational providers that will be promoted by the Chinese government will be increased from 77 to 105 under the agreement.

The agreement also promotes further Chinese investment in Australia by raising the Foreign Investment Review Board (FIRB) screening threshold for private companies from China in non-sensitive areas from $248 million to $1,078 million.

The Government will be able to screen investment proposals by private investors from China in agricultural land valued from $15 million and agribusiness from $53 million.

As well as significant trading opportunities, the FTA would build trust and confidence between the two nations, Mr Robb said. "I do think it is going to provide the impetus for taking our relationships in the Asian region .... to a whole new level," he said.

“Australia’s services industries such as legal services, education, telecommunications, tourism and travel, construction and engineering, and health and aged care services will all benefit from being able to do business in China more easily.”