'USMCA is the most important deal we've ever made by far’
US President Donald Trump read more
Our new e-magazine is OUT NOW. Click here to read.
REGISTER ADVERTISE
SUBSCRIBE TO OUR FREE NEWSLETTER
PUBLISHED | JULY 14, 2014
COMMENTS | NONE
Tweet 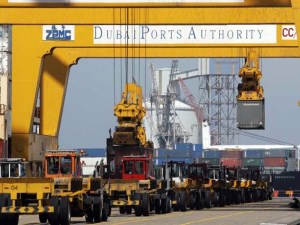 Jebel Ali Port has been voted the Best Seaport – Middle East for the 20th year in a row, at the prestigious Asian Freight and Supply Chain Awards (AFSCA).

The AFSCA winners were announced recently at a major ceremony in Shanghai, attended by several hundred leading transport, logistics and supply chain executives from around the region.

Mohammed Sharaf, Group Chief Executive Officer, DP World, says Jebel Ali is among the leading terminals in the industry, thanks to the outstanding performance of DP World’s UAE Region team in Dubai.

“We are proud to retain this prestigious award for two decades and particularly proud that it is an award decided by those who use our services, our customers,“ Al Muallem said.

The new terminal’s 1,860m long quay is nearly complete and nine brand new mega Ship-to-Shore Quay cranes (STS) are being tested before the start of initial operations in coming weeks.

Some 20 Automated Rail Mounted Gantry (ARMG) cranes are also moving on their rails at the 70ha yard.

As one of the finest modern marine terminals in the world, T3 will feature 19 of the largest and most modern quay cranes and 50 ARMG cranes, remotely operated from a sophisticated control room.

The AFSCA award is decided by key industry decision makers who take part in an independently verified nomination round followed by a voting round.

It has been organised by one of Asia’s leading transport and logistics newspapers, Cargo News Asia, for 28 consecutive years.