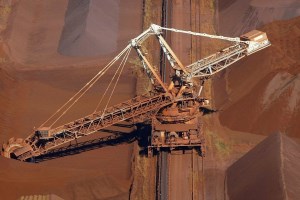 Australia reaped a record trade surplus of $5.75 billion in May, eclipsing the previous high of $5.4 billion recorded in February.

The surplus jumped by an extraordinary 19 per cent from April's already very healthy $4.8 billion, according to Australian Bureau of Statistics (ABS) seasonally adjusted figures.

This was well ahead of market expectations.

It is the 17th successive monthly trade surplus after years of heavy deficits. Australia’s five largest trade surpluses have all been recorded in 2019.

The surplus was largely driven by the recent boom in iron ore sales, with the value of shipments up 13 per cent.

Iron ore spot prices pushed through $US100 a tonne in late May and have risen more than 20 per cent since then.

Other key commodities, coal and LNG, recorded more modest monthly growth of 3.2 and 0.2 per cent respectively.

Rural exports were a mixed bag, with cereal and grain shipments up 17 per cent, marginally outstripping an 8 per cent decline in meat exports.

“Our export success has been fuelled by the Government having trade agreements with Japan, Korea, China and the TPP-11 countries in recent years, and we will continue efforts to expand access to international markets for Australian farmers and businesses.

“In light of the trade tensions between the US and China and a slowdown in world trade, it is pleasing to see our exporters continuing to weather global storms, with 17 consecutive trade surpluses and a new monthly record trade surplus.

“But now is not the time to put a handbrake on Australia’s exports. Instead we need to capitalise on our successes by continuing to reduce trade barriers and lower tariffs for Australian exporters.”