‘UK wine exports are at their highest level in a decade’
Rachel Triggs, Wine Australia read more
Our new e-magazine is OUT NOW. Click here to read.
REGISTER ADVERTISE
SUBSCRIBE TO OUR FREE NEWSLETTER
PUBLISHED | FEBRUARY 7, 2017
COMMENTS | NONE
Tweet 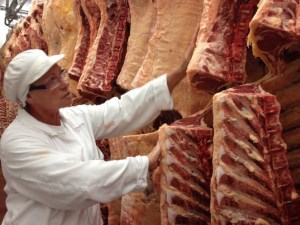 Strong demand for Australian beef among emerging export markets has led to many meat processing companies growing in revenue over 2015-16.

JBS and Teys have continued to consolidate their position as Australia’s largest meat processors. Despite being mature companies, both JBS and Teys have matched or beaten the revenue growth of newer industry operators to take out positions four and six, respectively.

While newcomers traditionally grow at a faster rate than established operators, Teys Australia made one of the largest jumps in revenue growth for the Top 100 Food & Beverage list.

An established player in the Meat Processing industry, contributing an estimated 13.7% of industry revenue, Teys reported revenue growth of 21.7% to reach $2.92 billion for 2014-15.

While the company generates most of its revenue from meat processing, it also generates revenue from other avenues, such as oilseed crushing and commodity merchandising.

With significant demand for beef coming from export markets, Teys has capitalised on this by increasing prices for its exported products, which has benefited company profit margins.

With weak production volumes in the US due to high feed costs, high operating costs and a prolonged drought, Teys have benefited from reduced competition in export markets. While a prolonged drought has negatively affected production volumes in the US, drought conditions in eastern Australia have resulted in high cattle numbers being processed. Cattle farmers were forced to sell as feeding costs soared, driving revenue growth for the meat processor.

Similar to other meat processors, JBS thrived over the 2015 financial year and has kept close pace with Teys, with expected growth of 17.6% for total company revenue.

JBS has capitalised on strong global demand for meat by expanding into export markets such as South Korea, Japan and China, where demand has increased due its rapidly growing middle class.

With increased sales to Asia, the depreciation of the Australian dollar and increasing slaughter rates, JBS Australia’s projected revenue has risen by 17.6% to reach $5.38 billion for the year ending December 2015.

As the industry’s largest player, JBS Australia has rapidly increased its market share to reach an estimated 26.2% of industry revenue.

Acquisitions have also played a large part in the company’s success, enabling JBS to consolidate its position and lay ground work for further growth over the next five years.

Despite 2015-16 being a good year for meat processors, industry revenue growth has been comparatively subdued compared to previous years.

Many farmers sold off considerable quantities of livestock over the two years through 2014-15.

Over the next five years, IBISWorld expects growth among processors to slow, particularly with poultry consumption on the rise.