Half of all Château Lafite in China is fake, says official 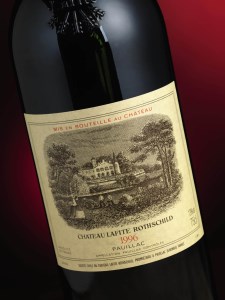 China’s love affair with popular Bordeaux wines is on the wane.

Sales of prestige French wines like Château Lafite are declining not only because of the Chinese government’s ongoing anti-corruption campaign, but also because of a huge rise in counterfeit labels.

According to a senior Chinese government official, about half of all the Château Lafite wine sold in China is fake.

Li Xinshi, president of the Chinese Academy of Inspection and Quarantine (CAIQ), made the prediction in an interview with respected British wine magazine Decanter.

The report comes as an Australian syndicate has developed a smart phone app to detect fraudulent prestige Australian wines sold in China, including Penfold’s Grange.

Mr Li was speaking at a recent conference in Bordeaux announcing the Chinese government’s launch of a new initiative called Protected Eco-Origin Product (PEOP) to protect against wine fraud.

Li believes the bulk of fake wines sold in China are being manufactured on boats moored in international waters off the coast of the mainland, where low-end wines are bottled in containers with high-end labels.

While he was unable to say how many boats with these operations exist, he described the problem of fake wine in China as “very serious.”

Bordeaux producers who want their wines to carry the PEOP label must first be certified by the Chinese government, reports Decanter.

The Chinese government has engaged CEO of Advanced Track and Trade (ATT), Jean-Pierre Massicot as an interlocutor between them and French wine producers who wish to join the PEOP scheme.

The labels will feature a number of visible and invisible codes, including QR codes that consumers can check with their phones.

Decanter reports that China has become the world’s biggest market for Bordeaux wine, accounting for almost 20 percent of the region’s wine exports by volume in 2013.

Producers are concerned at the impact of counterfeiting on future sales.

They are keen to ensure the authenticity of Bordeaux wines, especially since many have fallen ill from drinking imitations.

Not only are French wines considering labeling for protection, some Australian entrepreneurs are taking the same approach with mobile apps and labels as well.

Former Boomers basketball player Andrew Vlahov and his business partner Grant Shaw announced recently they have teamed up with Chinese IT company Invengo and consultants Deloittes to develop an app that detects authentic labels.

Mr Vlahov says customers will pay a small premium for a bottle of wine that's authenticated.

Tweet
Previous Comments Leave A Comment
Ahead of the game
Bevscan was developed by the Australian Wine research Institute AWRI(released in 2010) and can scan the contents of a bottle through the bottle glass and confirm in Less than 1 second if the contents are the same as 12 bottles scanned at the winery. Data on any wine can be provided to the Bevscan being used to confirm authenticity. Many individual parameters or an entire fingerprint can be assessed - brilliant Aussie technology which deserves promotion. Cheers
SUBSCRIBE TO OUR FREE NEWSLETTER
Our latest e-magazine is OUT NOW. Click here to read.