'USMCA is the most important deal we've ever made by far’
US President Donald Trump read more
Our new e-magazine is OUT NOW. Click here to read.
REGISTER ADVERTISE
SUBSCRIBE TO OUR FREE NEWSLETTER
PUBLISHED | JULY 10, 2018
COMMENTS | NONE
Tweet 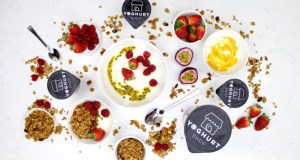 A premium yoghurt manufacturer from South Australia is expanding its reach into Asia in a bid to capitalise on the region’s growing appetite for high-grade dairy products.

The Yoghurt Shop started at the Adelaide Central Market in 2003 and grew to eight outlets in South Australia before shifting its focus to manufacturing packaged products for the national market.

Last year, The Yoghurt Shop began exporting its single serve packaged products to Brunei where it is sold in five retail outlets. In April this year it also started selling its products through a distributor in Thailand.

Working closely with one of the largest food retailers in Hong Kong and Singapore, Dairy Farm International Holdings, The Yoghurt Shop began trialling its products at the beginning of this year in one outlet in Hong Kong.

Following the successful trial, the yoghurts will be stocked in 50 Oliver’s and Marketplace by Jason supermarkets from next month.

A trial shipment to Shanghai has also recently been accepted, which is expected to lead small initial orders into China.

The Yoghurt Shop Managing Director Simon Reynolds said the Hong Kong expansion was hoped to lead to distribution through sister stores in Singapore by the end of the year.

“We’re really hoping that if Hong Kong takes off, it will give us a lot of credibility in Singapore,” he said.

“Most people understand that we have very high standards when it comes to export accreditation so if someone is buying for their children they feel very confident buying an Australian product.

“We’re also a real premium product so we’re aiming at the top end of the market and really looking to pick up some distributors who are looking for a high-end yoghurt.”

In China alone, yoghurt consumption has been growing by about 20 per cent a year since 2014.

The Yoghurt Shop products blend traditionally made Greek yoghurt with premium Australian fruit, nut and gourmet products. The company produces more than 30 variations of retail yoghurt and 10 flavours of frozen yoghurt at its factory between the Barossa Valley and the South Australian capital Adelaide.

Reynolds said not all varieties were available in every export market because they tailored flavours to specific countries.

“We’ve done a slightly sweeter version of our yoghurt for China, in Brunei they love fruits and in Hong Kong they want the more complex and decadent styles with crumbles and fudges,” he said.

“The key for us is to have numerous small client bases around Southeast Asia so we’re giving ourselves stability as we grow without relying on one or two markets or distributors.

“We’re not aiming for big volumes that would interest the big players, we’re looking to supply distributors that recognise our product as being premium and can market it to that top 20 per cent.”

The Yoghurt Shop expects to almost triple its sales in Asia from three per cent to eight per cent of its business within 12 months and plans to expand across Southeast Asia by 2022.

Reynolds said he was also looking at exporting to the UAE and Qatar in the future and hoped exports could account for 50 per cent of total sales within five years.