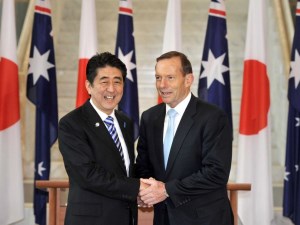 Primary producers and exporters across Australia are already seeing boosts to their bottom line as a result of tariff cuts gained under the Japan-Australia Economic Partnership Agreement (JAEPA).

Minister for Agriculture, Barnaby Joyce, said exports of beef, table grapes, wine and mangoes were among the commodities that were reaping the rewards of reduced tariffs.

“Despite the fact JAEPA only entered into force in January this year, exports have exploded across the board, driving solid profits back to the farmgate,” Mr Joyce said.

“Beef exports for the first six months of 2015 have increased by 31 per cent compared with the same period last year — a huge result in our second biggest export market for beef, worth a total $1.9 billion in 2014-15.”

Mr Joyce said fresh horticulture exports to Japan have also seen solid growth, increasing by almost 15 per cent for the first half of 2015 compared to the same period in 2014.

“This has been boosted by growth in table grape exports – grown from a zero base in 2014 to around $10.5 million in 2015 after the JAEPA tariff reduction and successful negotiation of an import protocol in 2014.

Wine exports to Japan have increased by 10 per cent, valued at $44 million.

“Seafood exports have also benefited with tariffs across a range of commodities already eliminated. Exports of prawns for example have doubled in volume to 188 tonnes in the first six months of 2015, to be worth over $3.6 million.”

Tariffs on a range of commodities will continue to gradually reduce, making exports even more attractive.

“These results mean real increases in returns to farmers – and tariffs are set to drop even further over the lifetime of the agreement,” Mr Joyce said.

“Not only that, but JAEPA has also provided access to new quotas for a range of products saving exporters about $2.9 million in tariffs to the end of May 2015.”

He slammed the Federal opposition and unions for the scare campaign, which threatens to undermine the recently signed agreement.

“ChAFTA will continue the delivery of real benefits to Australian primary producers and the rural and regional communities they support, but the cost of Labor’s opposition to this agreement could be devastating,” he said.

Mr Joyce said Australia faces stiff competition from other nations who export the same products into China and Japan.

“Agreements like JAEPA and ChAFTA give us the edge,” he said.