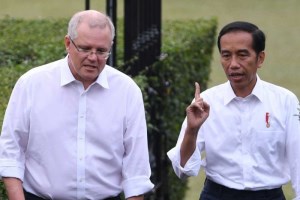 After eight years of negotiation Australia has finally signed a free-trade agreement with Indonesia.

“It is a win-win agreement that will result in better economic ties and closer strategic ties between Australia and Indonesia,” Senator Birmingham said.

The agreement should also benefit the Australian education sector, with universities and vocational training providers being given the green light to operate in Indonesia.

Also, it provides more opportunities for the Indonesian tourism industry and would help to, in attracting more investment, in ensuring that they can upskill successfully their workforce.

The deal provides greater access for Indonesians to work in Australia and will provide more support for its crude palm oil industry.

Why the agreement was delayed

An FTA was expected to be finalised late last year but was put on hold when Prime Minister Scott Morrison said Australia would consider formally recognising Jerusalem as the capital of Israel and move its embassy there.

Indonesia, the second largest Muslim-majority state in the world, strongly supports the Palestinian territories and expressed its concerns with the embassy proposal.

Also, ousted Prime Minister Malcolm Turnbull formed a strong relationship with Indonesian President Joko Widodo and his exit from Australian politics may have also pushed back the deal.

The trade deal has been eight years in the making with both neighbouring countries seeing great benefits in expanding economic relations.

Indonesia is on track be the world’s 5th largest economy by 2030.

Australian farmers are the big winners

Minister for Agriculture and Water Resources David Littleproud said once in force the deal would help farmers sell more product.

“Our farmers will export more produce because of this deal,” Mr Littleproud said.

“Beef and sheep farmers are big winners – tariffs will disappear and more cattle will be exported.”

Under the new deal, all tariffs (now 5 percent) on beef and sheep meat will be eliminated over five years with most eliminated immediately.

“Sugar tariffs will be slashed from a maximum 12 per cent to 5 per cent.

“The first 500,000 tonnes of grain per year will also be duty free and that will grow by 5 per cent a year.

“Improved duty free quotas will also be put in place for citrus and horticultural products.”

As part of the deal, Mr Littleproud said the government would increase work and holiday visas for Indonesians from 1000 to 5000.

This would assist Australian producers who need seasonal workers.

“Preferential deals will be put in place or duty will be removed for more than 99 per cent of exports to Indonesia,” said Mr Littleproud.

Senator Birmingham said the agreement would provide not just economic ties but “deep strengthening of the strategic ties between Australia and Indonesia.”

“Over time it will ensure that we have deeper, richer, cultural, diplomatic security ties because of the strengthening of those economic ties,” he said.

I hope and trust it will be a smooth process for it to be ratified and brought into force in both countries.

"Indonesia is a major trading partner close to our shores, so there are benefits in terms of reduced freight times.

"Having access back into this market that is so close, has such a large population and does have an appetite for Australian produce is a real boom for the vegetable industry."

“Australia now more than ever needs to double down on getting competitive,” Ms Westacott said.

“The best protection for Australian workers is a growing economy fuelled by new investment and easier access to global markets.

“This agreement will help diversify Australia’s trade and strengthen our economic and cultural relationship with one of our closest and largest neighbours.”

Ms Westacott said the agreement will also help encourage Indonesians to look to Australia more for potential markets, education, training and other services.

“It demonstrates both Australia’s and Indonesia’s commitment to rules-based global trade at a time when the voices against freer and more liberal trade are increasingly loud.”