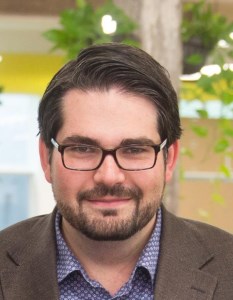 The next time you go online and order a pair of shoes to wear to a party that night, or a new TV to watch a football grand final that same day – and the item is delivered within three hours of your clicking ‘pay’ – spare a thought for Brad Lorge, and a project that began at the University of New South Wales (UNSW).

The 26-year-old is the co-founder and managing director of Premonition, a Sydney-based company that claims to have created a world-first automated dispatch system.

The new system uses artificial intelligence (AI) to help online retailers and shipping companies manage their deliveries as efficiently as possible, working in real time. It creates optimal routes on the fly, adapts to any changes or disruptions as they happen, and even predicts when and from where future online orders will come in.

“We also use AI to learn where the best parking spots are at any time of day,” Lorge says. “We make use of that in the office quite a bit!”

Lorge, along with co-founders Matthew Moss and Kenneth Wong, established Premonition in 2015. Having snared several big names in the Australian shipping space, the company is on track to be managing the delivery of 10 per cent of all Australian parcels by next year and is lining up some big deals overseas. The vision for the future is an ambitious one.

“We’re going to establish ourselves as the de facto standard for logistics,” Lorge says. “We want to be the gold standard for Australian engineered products and engineering teams who have taken on world-level problems and succeeded. If we can achieve that in the next five years I will be ecstatic.

Lorge’s confidence is well founded. As a 17-year-old Sydney schoolboy he was managing a global software engineering team with nine people in it. “I loved programming, saw some opportunities, got involved early in an idea someone had, and it just grew,” he says.

So, when he and fellow computer science students at UNSW set about tackling a logistics problem in a bid to help feed impoverished Australians, naturally they came up with a solution.

The team developed software to help food banks overcome the logistical issues they faced in getting unwanted food from supermarkets, farms and so on to people in need.

The research project became a business, Foodbank Local, and the delivery companies that used it soon saw wider possibilities.

“The commercial operators that we were dealing with in the not-for-profit space started asking us if they could use the technology for their own purposes,” Lorge says. “So we started commercialising off the back of that.”

UNSW was the perfect place for Lorge and his classmates to develop their ideas.

“We were incredibly lucky in our class,” he says. “We had some of the most inspirational, talented people who helped us develop as engineers. We were incredibly well supported by the university in the work we did.”

“In concert with Microsoft and UNSW, Data61 provided a huge amount of assistance, everything from working space to guidance and cutting-edge research that helped guide us through some tricky problems that stood in the way of solving this thing.”

Now, Lorge and colleagues are finding that being an Australian company is a huge help when it comes to selling their product overseas.

“Australian logistics operations are incredibly well respected globally and we’ve got some of the top universities from a tech point of view in the world. When you put those two together you get some great opportunities.”

Premonition’s technology is delivering substantial cost savings for the companies that adopt it, as well as enabling online retailers to offer services such as three-hour deliveries.

Thanks to exponential growth in online shopping, the shipping market is growing rapidly, and consolidating.

Lorge believes Premonition has that technology, and the company’s trophy cabinet seems to back him up. In 2015 Lorge was named Hills Young Innovator of the Year by the Australian Information Industry Association. Then, in 2017, Premonition was named Outstanding Startup at the UNSW Innovation Awards and was the Australian Technologies Competition winner for Smart Cities.

But it’s more than just plaudits and commercial success that drive Premonition. Efficient shipping is not just about profit; it leads to a lower environmental footprint, and more money in the pockets of drivers, who are often contractors paying for their own fuel.

“My real passion is the social impact of technology, be that delivering food aid or supporting the thousands of drivers who use our technology,” Lorge says.

“That’s why I love working at Premonition. We’re passionate about being a values-based business, generating revenue and being self-sustaining while having a positive impact in the world. Every member of the team is here to make a difference.”

Find out more about Premonition.