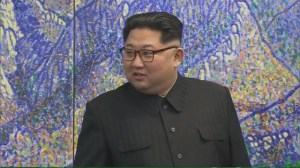 As South and North Korea head toward peace, companies are now looking at North Korea for business opportunities.

Lee Kwang-soo, an analyst at Mirae Asset Securities, said: "Development of infrastructure and cities is a must in economic development policies. Investment in construction is thus likely to expand."

Those with business experience in North Korea are also actively preparing for another upcoming opportunity. They are setting up taskforces and re-examining their files related to North Korea projects.

Hyundai Engineering and Construction (E&C), which has much experience in North Korea, also said it is carefully watching how the summit will unfold.

Korea Research Institute for Human Settlements had estimated it would take 93.5 trillion won (A$0.12 trillion) for joint development of the country, which reflects huge business opportunities there. Investment for urban development will also follow.

Except for its capital city Pyongyang, most North Korean cities are small, reported The Korea Times.

Vanessa Maebara is an editor for EMIS, a global leader in market intelligence.