'USMCA is the most important deal we've ever made by far’
US President Donald Trump read more
Our new e-magazine is OUT NOW. Click here to read.
REGISTER ADVERTISE
SUBSCRIBE TO OUR FREE NEWSLETTER
PUBLISHED | MAY 16, 2018
COMMENTS | NONE
Tweet 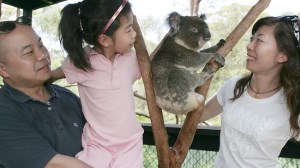 Australia welcomed a record 9.02 million international visitors in the year ending March 2018 – an increase of 7.7 per cent on the last 12 months.

Figures released by the Australian Bureau of Statistics also revealed that tourists spent a record $41 billion in Australia last year.

“The world is in love with our beautiful country and all it has to offer.

“The spectacular scenery, unique wildlife, and world-leading food and wine are attracting people to our shores like never before.”

Strong growth from US

Australia is also enjoying strong growth from the United States. A record 9.2 per cent increase in US visitors during the past 12 months comes on the heels of Tourism Australia’s recent Dundee campaign, aimed at further growing the lucrative North American market.

Through record funding to Tourism Australia the Australian tourism industry is growing three times faster under the Coalition than it did under Labor, said Mr Ciobo.

“This is creating new jobs and driving economic growth. In fact, five times as many tourism jobs have been created by the Coalition Government than under the previous Rudd-Gillard-Rudd Labor Government.”

Mr Ciobo said growing tourism is part of the Turnbull Government’s plan for a stronger economy.

“We are working to attract investment in tourism infrastructure, streamline visitor processing and improve aviation access, with a focus on getting tourists out into regional Australia.”

In the recent federal budget, Tourism Australia was allocated record funding of almost $149 million for 2018-19.