"Australia is running a trade marathon with its shoelaces tied across its feet"
Peter Kosmina (Trade Window) read more
Our new e-magazine is OUT NOW. Click here to read.
REGISTER ADVERTISE
SUBSCRIBE TO OUR FREE NEWSLETTER
PUBLISHED | MAY 13, 2016
COMMENTS | NONE
Tweet 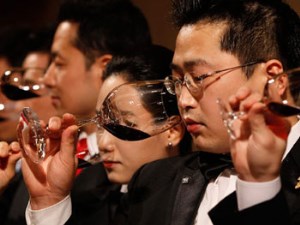 And China’s thirst for our wines shows no sign of waning.

The roadshow builds on the China-Australia Free Trade Agreement (ChAFTA) and a 64 per cent rise in Australian wine exports to mainland China over the last 12 months.

Roadshow exhibitors visited four key cities in a bid to create new commercial opportunities for growth and to build on important trade relationships.

An exclusive trade buyer tasting and a grand tasting were organised in each city and there was overwhelmingly positive feedback on the quality and diversity of the Australian fine wines on show.

Leading consultant Andrew Caillard, a Master of Wine, conducted a master class discussing the history and evolution of Australian wine.

Rui Liao, a journalist from Wine in China, said: “Andrew Caillard’s master class gave us a very clear picture of the history and development of Australian wine. It took me on a virtual trip to Australia with the flagship and iconic wines we tasted.

“During the roadshow, I tasted not only established Australian wine brands that already have a very good reputation in China, but also lesser-known, boutique brands of equally high quality that broadened my perception of Australia.”

Ned Zhang, A+ Australian Wine School educator from the Asia Wine Service and Education Centre, who attended the Roadshow events in Shanghai and Xiamen, was impressed by the local support for the Roadshow tastings.

The Roadshow showcased the diversified styles of Australian wine across different regions, he said.

Many exhibitors have already uncovered promising commercial leads since returning.

“I've met many buyers who have expressed a strong interest in purchasing our wines,” said Tang Yi, brand representative at Brown Brothers.

Willa Yang, Head of Market, China, said: “This is our sixth China Roadshow and it's remarkable to see the growth of this market for Australian wine exports in that time.

“I appreciate the efforts of every Australian winery and their in-market partners who have participated in this important marketing activity. Our collaborative efforts over the last six years have helped Chinese trade and consumers discover the diversity and dynamic culture of Australian wine.”