‘UK wine exports are at their highest level in a decade’
Rachel Triggs, Wine Australia read more
Our new e-magazine is OUT NOW. Click here to read.
REGISTER ADVERTISE
SUBSCRIBE TO OUR FREE NEWSLETTER
PUBLISHED | MARCH 6, 2014
COMMENTS | NONE
Tweet

China to push for free trade with Australia 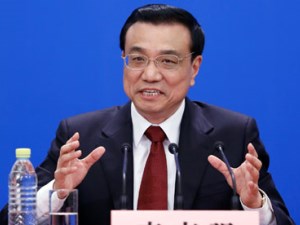 Addressing the National People’s Congress in Beijing, Premier Li, indicated he would like a free trade deal with Australia to be finalised shortly.

Li is scheduled to meet for trade talks with Prime Minister Tony Abbott in China next month.

China is Australia’s largest trading partner. Trade between the two countries is worth about $US130 billion a year.

Li’s announcement has raised the prospects of an agreement by the end of the year, which could result in a $20 billion windfall for the Australia economy.

The two countries have been negotiating a trade deal for the past eight years, but have failed to find common ground.

The Chinese government wants to see a move away from an overreliance on wasteful investment towards private demand driving economic growth.

“We must keep economic development as the central task and maintain a proper growth rate,” Li said.

In his report to the National People’s Congress Mr Li said China was keen to further liberalise its trading prospects with the rest of the world, and Australia is one of its main considerations.

“We will continue to promote trade and investment and liberalisation and facilitation, strive for mutual benefit with other countries and ensure that opening up reinforces and is reinforced by reform and development,” he said.

Earlier, China forecast its economy will grow by 7.5 per cent this year, but warned that the nation faced a “complex environment” that could hamper its official growth target.

China expects its inflation rate to remain around 3.5 per cent this year.

The Chinese economy, which is the second largest in the world behind the US, grew by 7.7 per cent in 2013 but the growth was the slowest in 14 years.