‘UK wine exports are at their highest level in a decade’
Rachel Triggs, Wine Australia read more
Our new e-magazine is OUT NOW. Click here to read.
REGISTER ADVERTISE
SUBSCRIBE TO OUR FREE NEWSLETTER
PUBLISHED | DECEMBER 21, 2020
COMMENTS | NONE
Tweet 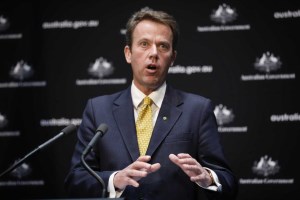 Former diplomat Dan Tehan will be sworn in this week as Australia’s new Minister for Trade, Tourism and Investment.

Mr Tehan takes on the portfolio as trade tensions with China, our largest trading partner, continue to escalate.

Mr Tehan, who has impressed the PM in his recent role as Minister for Education, has been elevated to the Trade portfolio in the recent ministerial reshuffle, triggered by the departure of long-serving Finance Minister, Mathias Cormann.

Mr Cormann has quit politics to run for the secretary general’s position at the Paris-based Organisation for Economic Cooperation and Development.

Senator Simon Birmingham, who has done an outstanding job as Minister for Trade and Tourism in an extremely challenging year, has been promoted to the Finance portfolio.

As the trade war with China reaches boiling point, Senator Birmingham has called for Australia to maintain “a sense of calm” as exporters seek to access other markets and pursue other opportunities.

In recent weeks China has imposed substantial duties on key Australian exports including barley and wine.

Senator Birmingham says Australia must remain consistent in the message we send to China.

“We value the partnership with them and we want to actually sit down and resolve these issues to enable our exporters and businesses to get back to business.”

Australia’s relationship with the world has been “an enduring interest and passion of mine,” he said in recent statement.

Mr Tehan has held key roles with the Department of Foreign Affairs and Trade, which he joined as a university graduate in 1995 and rose through the ranks to become a senior diplomat.

He also served as a senior adviser to the Trade Minister and as director of trade policy and international affairs at the Australian Chamber of Commerce and Industry.

Mr Tehan says Australia’s prosperity has been built on trade and our future relies on it.

“Investment by other nations in Australia also helps boost our exports by driving innovation and technological advancement. Investment by Australian companies overseas provides similar benefits at home and abroad.

“I will engage, listen and work tirelessly to advance Australia’s trade interests.

“I have always strived to engage constructively with all nations, and this will be the approach I will continue to take.”