Buffalo exports on the rise 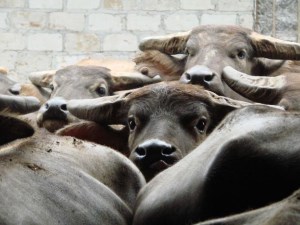 Last year more than 5,000 head of buffalo were exported from the Northern Territory – one of the best years on record – and trade is expected to increase in 2016.

According to the NT Department of Primary Industry, the majority of buffalo shipments (4,468 head) were shipped to Vietnam last year, with a further 625 head sent to Brunei.

NT Buffalo Industry Council spokesman Michael Swart told ABC Rural that despite a slow start and a lag towards the end of the year, shipments for slaughter-ready buffalo were strong.

"We haven't had too many years better than that, that's for sure," he said.

"We probably could have seen a few more go in November and December, but we're very happy with 5,000."

Mr Swart said he expected buffalo exports to increase even further over the coming 12 months.

"I think we'll see one or two extra players in the buffalo-buying market so hopefully that'll bring a bit more competition," he said.

"Last year it was predominantly SEALS (South East Asian Livestock Services) doing the exporting, but this year we could possibly see another two (exporters involved)."

While no slaughter-ready buffalo were sent to Indonesia in 2015, Mr Swart said there was strong demand for breeders.

"The NT Government recently gifted riverine buffalo bulls and hopefully with that will go a shipment of breeding buffalo cows," Mr Swart said.

"As part of their self-sufficiency policy, we could see more buffalo breeders sent that way."

Mr Swart said there were positive signs in the domestic market for buffalo as well, with a couple of trial consignments to an abattoir in Victoria going well late last year.

He said the industry was still hopeful the AACo abattoir near Darwin would agree to process buffalo.

According to the NT Department of Primary Industry, the NT's buffalo export trade peaked in 2006 when 7,748 buffalo were shipped from Darwin, mostly to Malaysia.