'USMCA is the most important deal we've ever made by far’
US President Donald Trump read more
Our new e-magazine is OUT NOW. Click here to read.
REGISTER ADVERTISE
SUBSCRIBE TO OUR FREE NEWSLETTER
PUBLISHED | MARCH 13, 2019
COMMENTS | NONE
Tweet 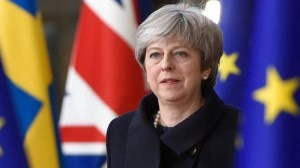 The revised deal was defeated by 149 votes – 391 to 242 – in the House of Commons after members of her own party and the Democratic Unionist Party voted against it.

The deadline for the United Kingdom to leave the European Union remains March 29.

Tomorrow Ms May will table a motion calling on MPs to vote on whether they prefer to leave the EU with no deal at all.

If the “no deal” also fails – as is widely expected – a third vote will be held on whether to seek an extension to leaving the EU.

But in that case, the Parliament would have to give the EU credible reasons why an extension should be granted.

UK should leave the EU ‘in an orderly fashion’

And if the EU agrees the deadline should be extended, it’s still highly unlikely the warring factions will find a solution to break the current impasse.

But if the EU grants a delay, Ms May’s options could include:

Speaking immediately after the vote, Ms May said she profoundly regretted the decision the House had taken.

"I continue to believe that by far the best outcome is that the United Kingdom leaves the European Union in an orderly fashion with a deal," she said.

"And that the deal we've negotiated is the best, and indeed the only deal available."

Ms May's first withdrawal agreement deal was put to the House of Commons in January and was voted down by 230 votes, the heaviest defeat of a Government vote in modern history.

They called on MPs to shut down the possibility of a no-deal Brexit and come up with a clear EU exit plan.

The City UK, the finance industry body, said leaving without a deal "would be an own goal of historic proportions."

The government will soon reveal more details of its no-deal plans, including trade tariffs and Irish border proposals.

CBI director-general Carolyn Fairbairn said the extension of the Brexit process "should be as short as realistically possible and backed by a clear plan."

"It's time for Parliament to stop this circus," she added.

Stephen Phipson, chief executive of manufacturers' group Make UK, said: "It is now essential that Parliament brings the curtain down on this farce and removes the risk of no deal.

"That outcome would be disastrous for the UK manufacturing, jeopardising many thousands of jobs in every constituency in the land."

Trade tariffs may be slashed

Last week, reports suggested that should the UK leave the EU with no deal in place, the UK government might cut trade tariffs on between 80% and 90% of goods.

Helen Dickinson, chief executive of the British Retail Consortium, said the public would be hit by no-deal Brexit in the form of tariffs, non-tariff barriers and currency depreciation.

These would "all push up costs and reduce the choice on the shelves we currently enjoy," she said.

She added that businesses are "exasperated by the lack of clarity over their future trading arrangements".

"Hundreds of ships are currently sailing towards Britain without a clear understanding of the tariffs, checks, or documentation requirements, they will face when they arrive," she said.

"No-deal would be catastrophic for the automotive industry," he said.

"It would end frictionless trade, add billions to the cost of manufacturing and cost jobs.

"UK automotive businesses will be put at immediate risk. Parliament must reject no-deal and take it permanently off the table," he added.

Nissan has already announced it is ending the production of two luxury vehicles in the United Kingdom, dealing yet another blow to a local car manufacturing industry.

The Japanese automaker will stop building the Infiniti Q30 and QX30 sport utility vehicle at its massive plant in the English city of Sunderland by the middle of this year. Infiniti will refocus its efforts on China and North America, its largest growth markets.

Earlier this year Nissan said it would reverse plans to build its X-Trail model in Britain, choosing instead to manufacture the SUV in Japan. It cited uncertainty over Brexit as one reason for the switch.

The Sunderland plant is the largest car factory in the UK, employing more than 7,000 people. Over 60% of the city's residents voted to leave the European Union in the 2016 Brexit referendum.

Australia has been positioning itself for a free trade agreement (FTA) with the UK following the Brexit referendum in June 2016.

A special working party has been established and negotiations are on-going.

However, Australia cannot sign off on an FTA with the UK until Britain has formally completed its departure from the European Union.

When that will be is now anyone’s guess.