‘UK wine exports are at their highest level in a decade’
Rachel Triggs, Wine Australia read more
Our new e-magazine is OUT NOW. Click here to read.
REGISTER ADVERTISE
SUBSCRIBE TO OUR FREE NEWSLETTER
PUBLISHED | NOVEMBER 2, 2020
COMMENTS | NONE
Tweet 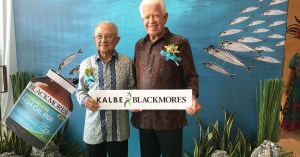 In just four years, Kalbe Blackmores Nutrition has become a winning brand in the premium health supplement market in Indonesia.

With the Indonesia-Australia Comprehensive Economic Partnership Agreement (IA-CEPA) creating new opportunities for businesses in both countries, the right partnership may help smooth the path to success.

Blackmores’ company founder Maurice Blackmore was a man ahead of his time. His views on natural health, preventive medicine, the environment and recycling were nothing short of radical in the 1930s, and his work opened the doors to new ways of treating illness and maximising health.

Founded in 1932, Blackmores is Australia’s leading natural health company. It is an ASX 200 business employing more than 1,400 people in Australia and across the Asia-Pacific region.

In 2016, Indonesia joined the list of markets where Blackmores has a presence.

“We saw enormous potential in Indonesia’s fast-growing economy, massive population, familiar retail channels and burgeoning e-commerce sector,” says Dean Garvey, Managing Director of Blackmores International. “We were eager to be a part of such a dynamic market.”

A partnership based on common values

Blackmores’ operations in Singapore, Malaysia and Thailand for more than 30 years had given the company a good understanding of the region and effective business models.

This is where PT Kalbe Farma Tbk stepped in.

“The synergies were strong from the start,” says Garvey. “Our ambitions and business plans were aligned. We had the same values. Importantly, our strengths complemented each other. We were both committed to making the partnership work.”

Ongkie Tedjasurja, Chief Marketing Officer for Kalbe Blackmores Nutrition, says the similarities in company culture and values were a major reason why the two companies agreed to a joint venture.

“Dr Boenjamin Setiawan, the founder of Kalbe Farma, and Marcus Blackmore have similar cultural and philosophical values, which made our two companies a good fit for each other,” he says.

“The Blackmores CEO at the time, Christina Holgate, was impressed by one value in particular: trust is the glue of life. The open and honest communication by Blackmores during the negotiations was appreciated by Kalbe Farma.

“We knew they would be a partner we could trust.”

In November 2016, Blackmores and Kalbe Farma announced they had entered into a joint venture – PT Kalbe Blackmores Nutrition – to form a sales and marketing vehicle to bring Blackmores to the Indonesian market.

Kalbe Blackmores Nutrition currently markets 38 stock-keeping units to around 7,700 outlets across Indonesia. These include modern and traditional apothecaries, drug stores, outlets that specialise in products for babies (Blackmores Pregnancy & Breast-Feeding Gold is highly popular in the country) and e-commerce channels.

At the time of writing, Indonesia is the only market where Blackmores has entered into a joint venture. The partnership has been a resounding success.

“Among like-for-like competitors, Blackmores is the biggest brand in Indonesia,” says Garvey.

“We knew the strong brand value of Blackmores would make an impact in the premium health supplement market, which was untapped at the time,” adds Dickson Susanto, General Manager of Kalbe Blackmores Nutrition.

“The joint venture has experienced exponential growth since 2017. We’re very happy with the performance of the partnership to date.”

In addition to market knowledge and advice that only a local partner can bring, Garvey says the partnership has enabled Blackmores to focus on building the business.

‘‘Instead of worrying about setup and admin tasks, the JV was able to use Kalbe’s IT and HR infrastructure,’ he says. “This freed up the team to concentrate on sales and marketing and educate retailers about our products so we could get a fast start.”

Garvey says Australian businesses should check that prospective partners have a history of successful working relationships with Western companies.

“Be aware that negotiations can take time so be patient,” he adds. “The cultural differences are there, but both sides make an effort to understand each other. We see Kalbe as part of our team. Be honest and clear about what you want out of the partnership, and don’t rush into it.”

If in doubt about business or regulatory requirements, Austrade can help.

“Austrade is a great source of advice,’ says Garvey. ‘We called on them when we had queries about labour laws, recruitment policies and reference checks on suppliers. They are a trusted partner.”

Preparing for the future

Both companies are taking the time to refocus and recalibrate so the business can emerge stronger after the COVID-19 crisis abates. Blackmores is eager to build the joint venture’s technology capabilities to make it easier for consumers to purchase products.

“We’re very happy with the results to date and are eager to find ways to strengthen the partnership.”

Although Blackmores does not directly benefit from IA-CEPA, Garvey says the trade agreement is great news for Australia and Indonesia.

“We love Indonesia and think it is an under-discovered country,” he says. “The more trade and investment that IA-CEPA brings to Indonesia, the more the country and its people will benefit.”

IA-CEPA opens the door to the Indonesian market, eliminating or reducing tariffs on goods and enhancing access for service providers and investors.