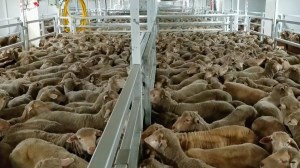 The Department of Agriculture has extended the prohibition on live sheep exports to, or through, the Middle East due to animal welfare concerns.

After taking into account scientific evidence and public feedback, the Department announced the ban would be extended from August to September 22 this year.

Evidence indicates the risk of heat stress for voyages departing Australia in the first three weeks of September is comparable to, or higher than in June.

The department found conditions in June (along with July and August) are too hot for sheep exports. The industry came to a similar conclusion.

For October, the risk of an animal welfare incident related to heat stress is more aligned with conditions in May.

Once trade resumes, shipments to or through, the Middle East must comply with the same conditions that applied in May this year.

The decision only relates to this year.

Future regulation of live sheep exports to, or through, the Middle East will be decided following a Regulation Impact Statement process.

Independent Inspector-General to be appointed

Meanwhile, an independent Inspector-General of Live Animal Exports is being established to provide an additional layer of accountability and oversight over the regulation of Australia’s livestock exports.

Minister for Agriculture, Senator Bridget McKenzie has introduced the Inspector-General of Live Animal Exports Bill 2019 into the Senate, claiming it provides a further layer of assurance over Australia’s livestock export system.

“Australians and the industry need to be confident the independent live export regulator,” Senator McKenzie said.

“The Inspector-General will oversee the Department of Agriculture’s regulation of live exports and will increase transparency of Australia’s livestock export management system.

“This is about building an effective regulatory culture that stands the test of time.

“The Inspector-General will promote continual improvements in the regulatory practice, performance and culture of the live export regulator.

“This is another step assuring the community, trading partners and industry that the regulatory system is functioning as intended.”

The main role of the Inspector-General is to audit and review the systems and processes that underpin the department’s regulation of livestock exports.

In March 2019 Ross Carter took on the role as Interim Inspector-General, pending the passage of this legislation.

He is about to conduct the first review of monitoring and reporting on livestock export vessels.

His program of work also includes reviews of livestock export licensing and permits, Approved Arrangements, and the Exporter Supply Chain and Assurance System.

An external, independent Inspector-General of Live Animal Exports was a recommendation of the Moss Review, of which the government accepted all recommendations.