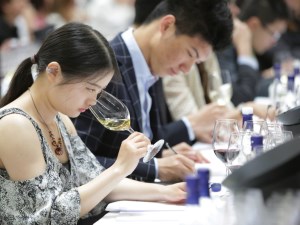 Record crowds at Vinexpo Hong Kong last week raised their glasses to the high quality of many of Australia’s finest wines.

The annual event, one of the biggest wine exhibitions in the Asia Pacific region, attracted crowds of more than 17,000 highly influential trade visitors.

And the Wine Australia pavilion was a star attraction.

“Among all of the pavilions, it seemed to me that Wine Australia’s pavilion was the most popular, always crowded with visitors,” said Joanna Zheng, Product Senior Director at Amazon China.

“The representatives from Australian wineries are very passionate about their wine, and they interacted a lot with visitors,” Ms Zheng said. “I can see that Wine Australia and the wineries and exhibitors they partner with are holding their hands together to bring the fine image of Australian wine to another high level.”

Exhibitors were delighted with the large number of visitors to the stand, which presented an outstanding opportunity to reach a broad cross-section of influencers from across the Asia Pacific region.

Emma Shaw, Global Sales Manager at Langmeil from the Barossa said: “This is my first time in Hong Kong for Vinexpo.

“The stand is so busy and we’re making some really good contacts,” she said.

“Vinexpo has been a great opportunity for us to meet our partners from all over Asia. For us it’s not about finding new customers or new markets, we’re pretty extensively distributed in this region. What it does allow us to do is meet with influencers from so many different countries in one spot. It’s a lot easier to come to Hong Kong than it is to also fly to Vietnam, Cambodia, Laos, Myanmar, Japan and China for example.”

New free trade agreements in the region have resulted in a 37 per cent increase in the value of Australian wine exports to Asia over the past 12 months.

Hiro Tejima, Wine Australia’s Head of Market Asia Pacific, said: “Vinexpo Hong Kong has always been an important trade event for us but 2016 has been simply stunning for Australian wine.

“The Wine Australia stand was arguably the busiest throughout the entire show. Our exhibitors were constantly surrounded by a crowd of keen wine buyers and media from not only Hong Kong and mainland China but also Singapore, South Korea, Japan, Taiwan, Malaysia, Thailand and India among many others.”

“Our aim was to share the Australian fine wine message during the show by showcasing the diversity and high quality of Australian wines, as well as hosting impressive master classes with incredible wines delivered by Masters of Wine and other key influencers.”

This year, the Wine Australia stand had a dedicated master class area where seven master classes were conducted by visiting and local tutors, including Corinne Mui from the Asia Wine Service and Education Centre and Eddie McDougall, founder of The Flying Winemaker, a local television series and online wine store.

Australian wine exports to Asia are now valued at $756 million, with higher priced wines over A$10 per litre making up 49.5 per cent of this total.