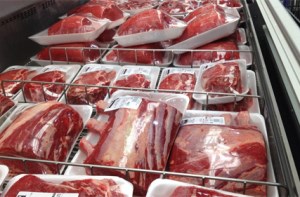 Australia’s lamb exports hit record levels in the first quarter of this year, driven by strong demand from China and US.

Lamb-producing regions in Australia hit by deteriorating feed conditions and drought have been pushing increased lamb and sheep numbers through to slaughter, reports First quarter Australian lamb exports were up 19 percent year-on-year and were 27 percent above the five-year average.

MLA said as is typical for this time of year, lamb prices have eased over the past six months.

However, for Australia and New Zealand, the seasonal dip has been far less severe this year.

The steady rise in lamb prices over the past six years is reflective of the emergence of China as a major buyer, growing demand in other premium markets and a weakening of both the Australian and New Zealand dollar, MLA said.

Despite the increase in supply pressure and poor seasonal conditions, prices in both countries have remained robust thanks to strong global demand.

However, Beef + Lamb NZ estimated the 2018-19 lamb crop to decline slightly, to 23.7 million head, so high export levels may reflect dryer-than-normal conditions in New Zealand and fewer lambs being held back as replacements.

Typically, New Zealand lamb exports peak in March but, depending on seasonal conditions, can remain elevated through to the end of May. MLA said given the lift in exports in March, New Zealand lamb supply may have already peaked for the season.

MLA said China is now taking half of New Zealand’s sheep meat exports and a quarter of Australia’s export output. While both countries have greatly benefitted from China, the market remains sensitive to fluctuations in its domestic flock and ongoing trade tensions, MLA said.

A slowing economy could also pose a risk to future demand. MLA said Australia fortunately has a diversified export portfolio of premium and secondary cuts markets.

MLA said lamb supplies in New Zealand will continue to dry up until the new season begins in the last quarter of the year. In Australia, much hinges on a decent autumn break in key sheep-producing regions.

Solid Australian rainfall in autumn and winter could see strong pressure applied to prices as producers shift into rebuild phase and re-stockers battle it out for the limited supply of sheep and lambs.

If adequate rainfall fails to arrive over the next few months, Australian kills will remain elevated.

New opportunities in Indonesia for training and education programs
How Australian exporters can now partner with Indonesian startups
Services exports set to soar in next five years, new report finds
Why Europe should be on the radar of Aussie exporters
NSW Government backs exporters to go global
more news
ADVERTISE WITH US