‘UK wine exports are at their highest level in a decade’
Rachel Triggs, Wine Australia read more
Our new e-magazine is OUT NOW. Click here to read.
REGISTER ADVERTISE
SUBSCRIBE TO OUR FREE NEWSLETTER
PUBLISHED | NOVEMBER 15, 2018
COMMENTS | NONE
Tweet 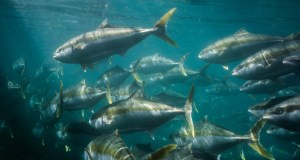 A premium Australian seafood company has signed an agreement with a distributor in China as part of its Asian growth strategy.

Clean Seas has long been the market leader in Europe and Australia and last year launched a campaign to increase sales to North America and Asia.

Based in the Northeastern Chinese trading hub of Hunchun, HH has a proven premium seafood distribution capability with annual sales of King Crab of about 6000 tonnes.

It has grown strongly since its foundation in 2014 and distributes live, fresh and frozen products to premium restaurants and food service outlets across China.

“We are excited to secure a distribution partner of Hunchun Haiyun’s reputation and capability,” he said.

“This partnership represents a material step forward in executing our international growth strategy.”

Head said Clean Seas had met with more than 20 potential strategic partners in Asia, more than half in China, who had existing sales, marketing and distribution capabilities with other premium seafood products.

“In addition to these potential strategic partners, we have also been meeting with end user customers and their suppliers including international hotel chains with multiple premium properties and restaurants across Asian markets,” he said.

“We are also in discussions with a number of leading food exporters in Australia with existing supply channels into premium Asian seafood markets.

“We expect to formalise a number of non-exclusive distribution partnership deals across these channels over the coming 12 months.”

Yellowtail Kingfish with its creamy white to pale pink flesh is known for its sashimi qualities but is also gaining traction as a versatile cooked product.

Largest producer outside of Japan

The gulf is fed by the Southern Ocean and has a direct line of sight to Antarctica some 3500km to the south.

The majority of Clean Seas’ Kingfish are sold whole and fresh and are airfreighted around the world in refrigerated containers with FY2018 sales up 15 per cent to 2640 tonnes.

However, a new processing plant and rapid freezing technology commissioned in Adelaide this year has helped the company enter new markets.