‘UK wine exports are at their highest level in a decade’
Rachel Triggs, Wine Australia read more
Our new e-magazine is OUT NOW. Click here to read.
REGISTER ADVERTISE
SUBSCRIBE TO OUR FREE NEWSLETTER
PUBLISHED | APRIL 12, 2017
COMMENTS | NONE
Tweet 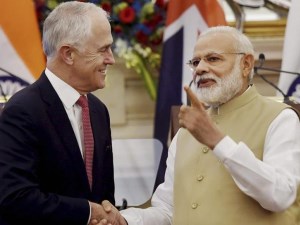 This follows talks with Indian Prime Minister Narendra Modi during Mr Turnbull’s four-day visit – his first to India since he assumed office in September 2015.

The two leaders also agreed to deepen cooperation in defence and security as well as in education.

"We've worked closely with India to meet our respective requirements for the provision of fuel for India's civil nuclear program, and we look forward to the first export of Australian uranium to India as soon as possible," Mr Turnbull said in a joint statement after holding bilateral talks with Mr Modi.

The joint statement said India welcomed the passage of the Civil Nuclear Transfers to India Act by the Australian Parliament, which could ensure commercial exports of Australian uranium begins soon.

India is keen to source environment friendly fuels to power its growing economy.

Mr Turnbull said his country was "pleased to be providing increasing quantities of high quality coal for steel making and increasingly for power generation with advanced super critical technology".

Earlier this week the two countries signed half-a-dozen agreements including one to significantly expand counter-terrorism cooperation as Mr Modi and Mr Turnbull called for strong action against those financing and providing sanctuary to terror groups. The others were in the areas of health and medicine, sports, environment, climate and wildlife, civil aviation security and cooperation in space technology.

The two leaders also directed their officials to hold an early round of negotiations on a comprehensive economic cooperation agreement (CECA), several rounds of negotiations for which have already taken place without a breakthrough.

“We took a number of forward-looking decisions to further strengthen our partnership, including the decision to soon hold the next round of negotiations on a CECA,” Mr Modi said.

During their talks, the two leaders decided to expand their ties in several key areas including defence, trade, energy and education.

Both leaders welcomed “continued and deepened” trilateral cooperation and dialogue among Australia, India and Japan.

After the talks, Mr Modi said that cooperation in the fields of education and research was "one of the most important aspects" of India-Australia ties.

"Both India and Australia recognise the central value of education and innovation in the prosperity of our societies," he said.

"It is no surprise, therefore, that cooperation in the field of education and research is one of the most important aspects of our engagement."

Mr Turnbull said Australia was also helping India in its water management policy while sharing expertise in the area of renewable energy.

Stating that trade in goods and services between the two sides stood at $20 billion, he said there was scope for increasing this.

"We are working with India for a quality RCEP (Regional Comprehensive Economic Partnership)," he said.

RCEP is a proposed free trade agreement between the 10 member-states of the Association of Southeast Asian nations (ASEAN) and the six countries with which ASEAN has free trade agreements – Australia, China, India, Japan, South Korea and New Zealand.

Mr Turnbull said a comprehensive bi-lateral trade deal “will take some time” given India’s traditional protection for its farmers.

“It is a process that will take some time,” he said. “India has a long history of protection, particularly for agriculture.

“We are a huge agricultural exporter. We want to have open markets for everything, but in particular agriculture. So it will take some time but the important thing is to persevere.”

Australia’s two-way trade with India was worth $18 billion in 2015 but has shrunk since a decade ago, with a key factor being the fall in the number of young Indians coming to Australia to study after a series of attacks on foreign students in 2009 and 2010.